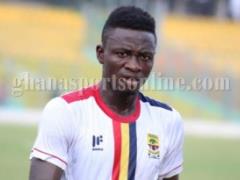 Defender Fatau Mohammed is among 16 players who have been transfer-listed by Hearts, Ghanasportsonline.com has reported.

The youngster to impress last season after playing a cameo role in the side's campaign last term.

The right-back is reported to be among several players who are believed to be on their way out of the club.