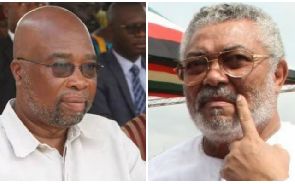 Dr. Henry Lartey has accepted to swear an oath to the gods – Antoa specifically – as dared by former President John Rawlings, in a bid to establish whether or not he (the flag bearer of the Great Consolidated Popular Party) took money from the governing party to vilify the former military ruler vis-à-vis the $5million Abacha gift saga.

Mr Rawlings threw the challenge recently when he met some queenmothers at his office in Accra. He said some people – who are not in the opposition parties – paid Dr Lartey to "vilify" him in connection with the gift controversy involving late Nigerian President Sani Abacha.

He told the traditional leaders that he had prior knowledge of Dr Lartey's planned attack on him before it happened.

"About three days before his drama, I got information that he was going to be financially rewarded for what he did and incidentally he was instigated not by people in the opposition," Mr Rawlings revealed.

"Why are people worried about the level of integrity we've tried to maintain? We say we are Christians; we swear on the Bible, Muslims on the Qu'ran; I'd like to invite people like him (Lartey) that we go traditional as well. That we invite the white man's technology (lie detector) to also come and verify the truthfulness, the integrity of my word. And for him to be simply asked who paid him to do what he did?" Flt Lt Rawlings urged.

Dr Lartey has dragged Mr Rawlings before the Commission on Human Rights and Administrative Justice (CHRAJ) to test his self-acclaimed incorruptibility, saying the former military ruler lied to Ghanaians and Africa about some monies he received from some African leaders in the past.

Dr Lartey dared the former president to come clear on his comments during an interview with the Daily Graphic that he was not corrupt and his integrity was intact and unshakeable following his admission that he received $2million rather than $5million from the late Nigerian leader military dictator.

Addressing a press conference in Accra on Wednesday July 27, Dr Lartey dared the former president to make himself available to investigations, if, in fact, he was incorruptible as he claimed.

"…We will take JJ Rawlings to CHRAJ for him to come and account to Ghanaians. Probity and accountability; we want to hear from him, so founder, come and tell us, please come and tell us how clean you are. We want to [ask]: 'Are you clean, JJ Rawlings?' Read my lips – JJ Rawlings, are you clean? If you are, don't let us go to CHRAJ; you yourself, go to CHRAJ and say: this is my situation. We asked questions and he says: 'Posterity will judge me.' No, we want to judge you now, not posterity…" Dr Lartey stated.

"How much did Gaddafi give him? We know he was close to Gaddafi. How much did Gaddafi give him that we are not aware of? Probity now, not posterity. We (GCPP) want to win this power and help Ghanaians. We want to stop corruption now with JJ Rawlings. He is the father of probity [and] accountability, so we will start from him. He has lied to us, he has lied to his family, he has lied to the whole Africa, we are disappointed and I am disappointed with him."

Following the counter-challenge by Mr Rawlings, Dr Lartey told Accra-based 3FM on Tuesday, 18 October that: "I am not scared. If you believe in God you will face any devil, anyplace, anywhere, anytime. I am not panicking; the truth will always be the truth. I am a full Christian and I practise Christianity. Moreover, I am basically an African and if we have African traditions, we go through it. We might perhaps go ahead to see the national imam and the council of the charismatic churches too. The truth is always the truth and always will be the truth…

"Rawlings hasn't got any intelligence, he's portraying the typical gestures of the PNDC, and I am going to have a press conference to reveal everything I know. I have many things to say. [There's] a lot of information about Rawlings and his wife [that] I have to let out of the bag. He cannot lie and cheat this time around," Dr Lartey said.

He also denied claims that he was paid by the NDC to malign Mr Rawlings. "My father left me a lot of assets and no one can pay me in Ghana. My house I live in Osu behind the Christianborg Castle is worth over 100 million dollars. It's quite hilarious to hear that from my friend Rawlings, it's an incredible allegation, he can't prove it. Will he tell me who paid me? Was it General Mosquito or Kofi Adams? This is democracy, I dare him to. Why would I dare a former head of state if he hasn’t taken the money? Was it 2, 5, or 100 million? He should come out to say it," he explained.