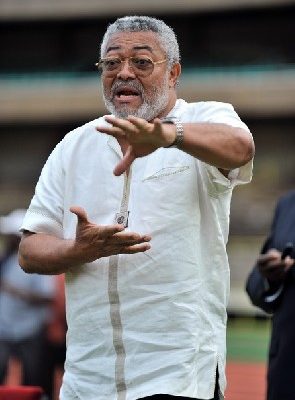 He vowed on 3FM Sunrise morning show hosted by Winston Amoah Tuesday that he is prepared to go any length to expose former president Rawlings and his family.

Dr. Lartey who has been disqualified by the Electoral Commission from contesting the 2016 presidential election has been on the neck of former President Rawlings over $2 million dollar the latter received as gift from late Nigerian president Sani Abacha.

He suspected corruption and called on the Economic and Organised Crime Office and the Attorney General to investigate the former Ghanaian leader.

But Mr. Rawlings has come hard on Dr. Lartey claiming he was being induced financially to attack him (Rawlings).

The assertion has been rejected by the GCPP leader. “If he’s got those facts he should come out and tell us.

Who has paid me, my father left me a lot of assets and nobody can pay me to do what he’s claiming. I am going to have a press conference to reveal more about them,” Dr. Lartey promised.

“I’ll tell the whole country at the Press conference. There is a lot to say about him and his wife, the corruption that has gone on in this country.”

He claimed former President Rawlings extended an olive branch to him over the issue but he declined the gesture.

“He requested a meeting with a good friend of ours to discuss this issue amicably but I refused because it’s public knowledge and must come out.

“So once he’s spoken to the Queenmothers let’s deal with it that way so the truth comes out. Once he has come out” He accepted a challenge from Mr. Rawlings asking that they go the traditional way to ascertain the truth surrounding the whole brouhaha.

Dr. Lartey narrowed the challenge down to a fearful gods in the Ashanti region – Antoa Nyamaa. “I am not scared of any body. When you speak the truth you’re not scared of anybody including God,” he said.

Dr. Lartey further stated, “For what reason would I take money to destroy our former head of state?

“They killed Ken Saro-Wiwa, the guy was writing for the Ogun people because Nigeria Shell was digging the oil and exploiting the indigenes. They found a way to kill a chief to frame the journalist. When he was hanged the whole world was against General Abacha for that, except our Head of state.

“I’m willing to go to Antoa, I’m willing to go anywhere, the charismatic churches and even the Chief Imam anywhere. If you tell the truth, you are not scared of anybody not even God.”3news.com