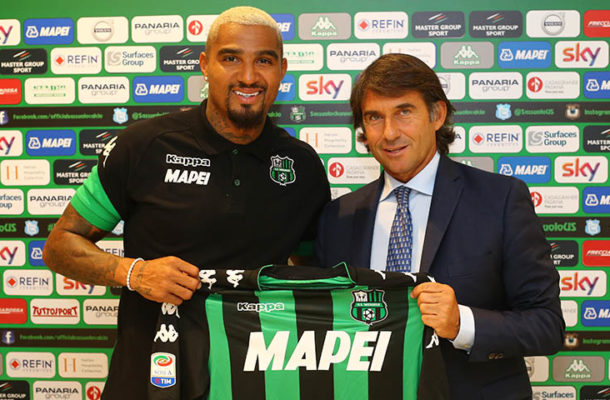 Boateng joined the Neroverdi on a two-year deal from German Bundesliga side Eintracht Frankfurt.

The 31-year-old has already hit the ground running for the Mapei Stadium outfit after scoring a hat-trick in their 7-0 thrashing of Wipptal in a friendly tie on Tuesday evening.

Rogério, who re-joined the side on loan from Juventus, expressed his belief that coach Roberto De Zerbi has assembled a winsome side ahead of the coming season.

"We are happy for the new acquisitions made by the club, they are footballers who can give us a lot of quality and we hope to make a good championship. It served to put gas in our legs and we have to continue like this to get the best out of the first Serie A outing. "

Rogério was asked his impression on the former Schalke 04 forward, he said, "I was watching him when he was playing for Milan, I'm happy because he's a champion with experience, we young people are happy to play with him to grow up".