How an ex-death row inmate freed himself from jail 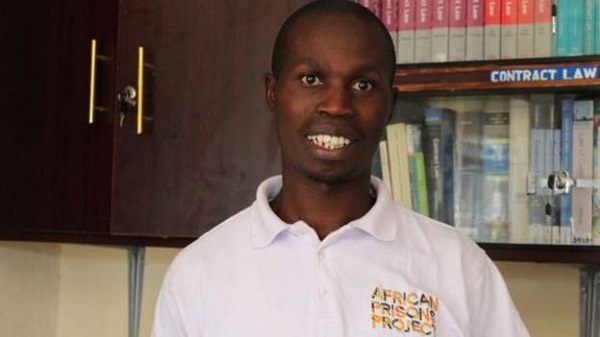 William Okumu spent about 10 years on death row for robbery

A former death row inmate in Kenya has told the BBC of his joy at having graduated with a law degree from the University of London.

William Okumu, one of several inmates or former inmates who graduated at a ceremony last Thursday at the Kamiti Maximum Security Prison in Kenya's capital Nairobi, told the BBC’s Focus on Africa radio programme:

Mr Okumu, who is in his mid-thirties and was released from jail in May, said the law degree had changed his life.

He was able to use the legal skills he gained while studying as a prisoner to defend himself and others.

He said his motivation to pursue law was the realisation that his sentence had been due to his lack of a proper understanding of the law as he did not have legal representation during his original trial.

After a 2017 Supreme Court ruling that said the death penalty was “inconsistent” with Kenya’s constitution, Mr Okumu, who was in jail for robbery with violence and handling stolen property, had the opportunity to represent himself in court to argue that his original sentence had been too harsh.

A judge agreed and commuted his sentence to 10 years, which he had already served.

He was able to do all of this thanks to the African Prisons Project (APP), a charity which operates in more than 15 countries on the continent, helping prisoners get access to justice.

There are more than 50,000 prisoners in Kenyan jails, the majority of them who are petty offenders living in overcrowded cells, according to the online database World Prison Brief.

Poverty and low education levels among inmates often mean that many are unable to access legal representation.

Despite the 2017 Supreme Court ruling, a provision for the death penalty still exists in Kenya’s criminal law – though no death sentence has been carried out in East African nation since 1987.