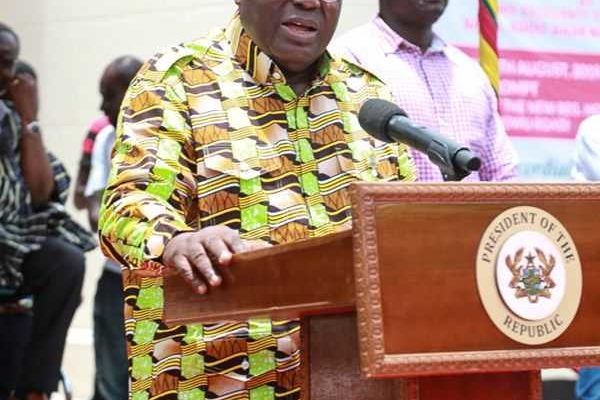 President Nana Addo Dankwa Akufo-Addo has once again expressed his optimism about his party's winning power for an unprecedented 3rd successive time.

He said that the New Patriotic Party (NPP) nearly “broke the 8” in the 2008 presidential election with him as its flagbearer but was only denied by some 20,000 votes.

In a Radio North Star interview monitored by GhanaWeb, the president added that he is confident the party will this time around “break the 8” because of the good work his government has done for the people of Ghana.

“We went to a second round and in that second round, I lost by 40,000 votes. President Mills was elected with 50.01 percent of the overall votes. It is the narrowest margin of victory in any presidential contest of the 4th Republic. What that tells you is that the NPP was extremely close to making that statement (Breaking the 8) in 2008.

He added that, “We have all learnt our lessons from what happened. Those (the lessons) that came from our own side and those that were external. And we are determined that not only will it be a victory but it will be a decisive victory in 2024.”

The president has previously stated that handing over to another New Patriotic Party (NPP) president come 2025 will be the last feat of his political career.

“I want to end by making one appeal. I want you to help me to achieve the last great political feat of my career in Ghanaian politics. On the 7th of January 2025, I will go to Black Star Square and hand over the baton to our next NPP President of the Republic who we would have chosen, supported and brought to victory,” Akufo-Addo said over the weekend.

“Victory in 2024, that is our goal, that is our task and that by the Grace of God, we will achieve,” he stressed while addressing party faithful who had gathered at the University of Professional Studies, Accra (UPSA).