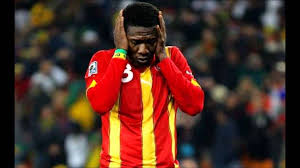 Black Stars captain, Asamaoh Gyan has revealed that he is still haunted by the images of the 2010 World Cup penalty miss against Uruguay.

Its been 8 years since the penalty that could have taken Ghana and Africa to its first Semi-finals spot in history, but Gyan is still remorseful and says the horrors of that failure is going to live with him for the rest of his life.

Speaking as a guest at the 8th edition of LEAD Series held at the Accra Mall on Saturday, he added that he sometimes wishes events could be rewined to that very moment again so he has another opportunity to redeem himself.

The 31 year old said he has however accepted what happened because there is nothing he can do to change it.

Watch Gyan talk about the penalty miss below.