'I didn't wanna embarrass Hillary Clinton, i was holding back at debate'- Donald Trump says 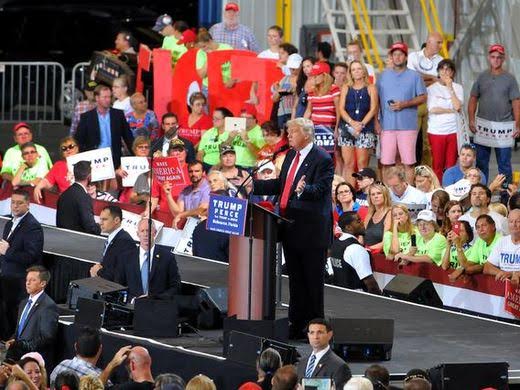 Donald Trump has suggested that he did so well at Monday Night's U.S Presidential election debate claiming he held back because he didn't want to embarrass his rival Hillary Clinton.

Speaking to a fired-up crowd in Melbourne on Tuesday, Trump said that he has the momentum for victory after what he said was a strong win in Monday's debate against Democrat Hillary Clinton.

'Clinton is as crooked as they come," Trump said, 'Everything she did turned out bad."

"I was holding back. I didn't want to embarrass her."

"She is the candidate of yesterday, and ours is the campaign and the people of the future," Trump said. "She's an insider, fighting only for her donors and insiders. I'm an outsider fighting for you."

During his speech at the AeroMod International hangar at Orlando Melbourne International Airport, Trump said Clinton was "incompetent as secretary of State."

"Crooked Hillary is going to be worse than Obama, and we can't let it happen," Trump said.

Trump also promised that he would "build the wall" to prevent illegal immigration into the United States from Mexico, and that Mexico would pay for it.

Hearing those remarks, the crowd estimated to be about 8500 chanted: "Build the wall."