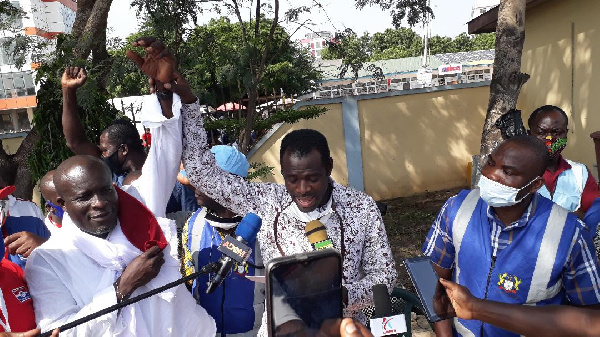 The losing aspirant in the governing New Patriotic Party’s Tema East parliamentary race, Mr Benjamin Ashitey Armah, has said while he gave each of the 767 delegates that voted in the internal polls GHS550, his main contender, the incumbent MP, Mr Daniel Titus-Glover, gave each delegate a tabletop fridge and GHS1,000.

Mr Armah told Kwame Appiah-Kubi on CTV’s Dwabre Mu morning show on Monday, 22 June 2020 that: “I use the little resources I have to do my politics”, adding: “I was able to give each delegate GHS550”.

“He [Titus-Glover] gave each delegate a tabletop fridge, GHS1000 and even went the extra mile to give some delegates in my stronghold an extra GHS500”, he alleged.

“So, you see the monecracy coming in here, which turned the tides in his favour contrary to the predictions of the office of National Security and other research organisations”, he added.

Asked how he got to raise the money to pay the delegates, Mr Ashitey Armah said: “I have been in the shipping industry for a very long time and by the grace of God, I have my own business in the logistics field, so, I do everything according to my financial might”.

As far as he’s concerned, “It is the delegates' decision that they will go for money instead of competence”, adding: “These are the same delegates that always come to you to complain that things are not going on well with them and, so, they need some financial help”.

“We don’t use the money to entice the delegates”, he denied, explaining: “We just give them transport and compensate them for the opportunities they may have lost as a result of leaving their homes and jobs to come and vote for you”.

“Of course, that person [delegate] would have to forego an opportunity to come and work with you or to come and vote for you and, so, you also have to meet that person halfway because he/she could have, perhaps, made more than that amount if he/she had gone to work that day”, he further noted.

“Nevertheless, the delegates are not taken good care of in the party, so, they also feel that that is the time to exact their pound of flesh, which for me, I don’t think is right because it is important to vote for competence over money”, he emphasised.

Mr Ashitey Armah said although he lost, “I’m still a happy person because it is not easy to come up against a whole party machinery in an election”.

“It was clear that the government and party machinery was behind Titus-Glover. Everybody saw it but the elections are over and I have put it behind me. I love the party so much that I don’t want anything to distract the party’s victory in 2020, so, I’ve given it all to God”.

“I’ve congratulated Titus-Glover. I’ve also said that we have a common goal and one common enemy, that is the NDC, and we must all come together to form a very huge alliance and win massively for the NPP”, he added.