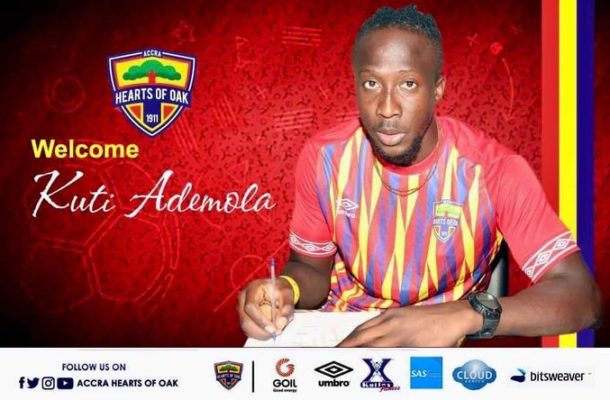 New Hearts of Oak striker Danjuma Ademola Kuti has heightened the hopes of Hearts of Oak supporters not to quiver or shiver as life after Joseph Esso and Kofi Kordzi with him will be magical.

The striker was bought just before the coronavirus pandemic struck in the middle of March but says he score magical goals when you least expect him.

He says it is very difficult for defenders to mark him as he can pop up anywhere and score goals.

In an interview with Kumasi FM, the Nigerian striker boasted that he scores magical goal and this will certainly excite the phobian fraternity.

"I don’t have a threat,I’m a tricky striker who score magical goals,I score unexpected goals.I can score when you least expect me to,when you do not believe me to score,I will."

"It is very difficult for a defender to study my way of scoring.A defender can mark me but you have to be careful because I can score unbelievable and magical goals," he added.

Hearts of Oak have lost their top scorer last season with Kofi Kordzi who scored six goals leaving for pastures anew in the Gulf region while Joseph Esso has also left the club on a free transfer.