“All I want for Christmas is you… to grow up, Mariah” – Piers Morgan Comes hard on Mariah Carey

Following the emergence of new photos of popular singer Mariah Carey and her new boyfriend, Bryan Tanaka, British journalist Piers Morgan has written an article, calling on the singer to “grow up”.

Carey, 46 was seen wrapping one leg around, and kissing Bryan, her 33-year-old backup dancer while standing in the surf in Maui, Hawaii. 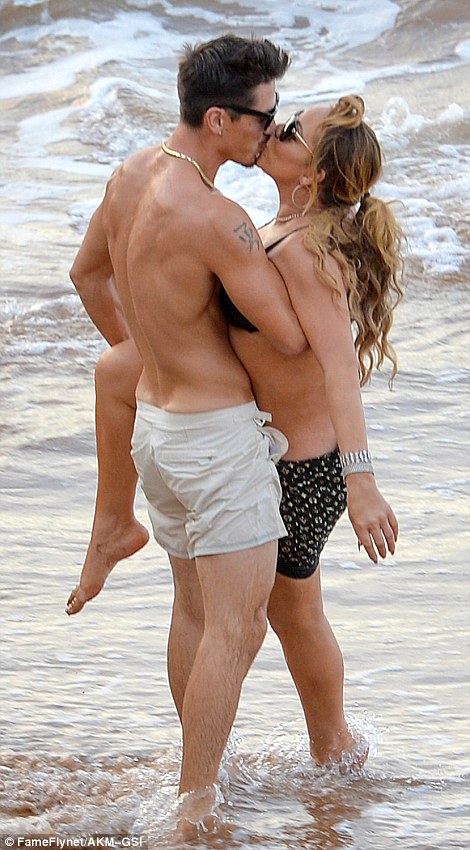 The “We Belong Together” singer broke up with her Australian Billionaire fiancé James Packer in October this year.

Read Morgan’s article on DailyMail below:

Mariah Carey once kept me waiting all day.

I can remember it now: every single one of the long, tedious, 12 hours that I was held virtual hostage in my dressing room while Her Majesty played up like a tantrum-prone toddler who’d had her pacifier removed.

She’d been booked to do a two-minute performance on America’s Got Talent, but refused to sing live. So the judges, including me and Sharon Osbourne, were hauled in on our day off just so she could pre-tape her song.

We arrived at midday. By 6pm, Mariah still wasn’t ready, so the 2000-strong audience was sent home, and an entirely new one was bused in. Come midnight, Mariah STILL wasn’t ready. Sharon and I were by now so furious that we informed the AGT producers we’d had enough and were going home.

Eventually, long after we’d gone, Ms Carey finally appeared on stage and sang to a bunch of stand-in, lookalike judges and a VERY angry audience. It was quite extraordinarily selfish and rude behaviour, and yet there wasn’t a hint of apology. What made it even more outrageous was that her then husband, Nick Cannon, was the show’s host! So she kept him waiting all day too.

I’ve thus had bitter, first hand experience of the world’s biggest showbiz diva and it was deeply aggravating. Conversely, I’ve had also had many other times with Mariah that were good fun. Not least her baby shower party in a Beverly Hills hotel five years ago, which was held in a giant gift-festooned room that resembled the entire Harrods toy department. (The centre-piece was two life-size fake giraffes…)

There is no denying her wondrous talent either. Mariah’s a fabulous singer, truly one of the greatest of all time –right up there with Whitney Houston and Barbra Streisand. One of those rare artists who can hit big and soft notes with equal power and quality.

And she’s a smart, beautiful and amusing woman. But lately, I’ve started to despair about Ms Carey. First there was the messy, acrimonious split and divorce from Nick, who I know well and is a great guy. They have a set of boy-girl twins together and he, and they, deserved better than having a load of unsubstantiated public mud slung at his reputation from Mariah’s camp.

Then came the often toe-curling and ostentatious relationship with billionaire Australian tycoon James Packer that blew up in flames a few months ago – amid rumours of her close relationship with a back-up dancer.

Details of the couple’s pre-nuptial negotiations leaked out after the engagement was called off. It made for deeply unedifying reading. Mariah Carey is one of the wealthiest, most successful entertainers in the world. Yet there she was, actively negotiating through her lawyers over how many millions of dollars she might get if the marriage ended.

Last week, further reports emanated that Mariah is now angling for a $50 million ‘inconvenience fee’ settlement from Packer because she had to briefly relocate to Los Angeles. Are you bloody kidding me??? Where’s your pride, lady?

You’re worth a reputed $500 million, you don’t need a cent of any man’s money.

Nothing, though, quite prepared me for the horror this morning of Mariah’s staged photo-call in the Hawaii ocean with her new boy-toy, the aforementioned back-up dancer, Bryan Tanaka.

I didn’t think any set of choreographed, water-based celebrity photos could ever be more embarrassing than those of Taylor Swift and Tom Hiddleston earlier this year. I was wrong. This was on a whole new level of cringe.

Mariah and back-up dancer Bryan – who at 33 is 13 years her junior -cavorted in skimpy swimsuits like a pair of love-struck teens. Each image struck a new mind-boggling low of excruciation.

Mariah jumping on his back, sliding under his legs, being carried through the waves… and generally pawing her young lover like an over-excited Labrador in heat. At one stage, Mariah even suffered an ‘accidental’ nip-slip wardrobe malfunction.

It was obviously all a very deliberate, very public two fingers to James Packer. It was also an act of utter desperation by a once very classy chanteuse who is now rapidly morphing into Norma Desmond, the fading star of Sunset Boulevard.

By an astonishing coincidence, Mariah’s new reality TV show, Mariah’s World, starts this Sunday night on E. So this shocking beach photo-stunt was all clearly staged to promote that as well as tick off her ex-fiancé. Yet why the hell is she doing a reality show at all?

She’s Mariah Carey for goodness sake, not a talentless Kardashian.

There’s something  tacky, tasteless and unsavoury about Mariah’s antics -bordering on Madonna-esque. As with Madonna, the only real victims are likely to be her children There’s something really sad about her increasingly tacky, tasteless and unsavoury antics, especially for all those of us who love her voice. I can say nothing more devastatingly damning than that it is bordering on Madonna-esque.

And as with Madonna, the only real victims apart from her dignity and reputation, are likely to be her children. This is the time of year when the whole world hears and sings Mariah’s anthem, All I Want For Christmas Is You – theme tune to the smash hit festive movie Love Actually. So let me borrow a verse from that classic yuletide song to make a personal plea.