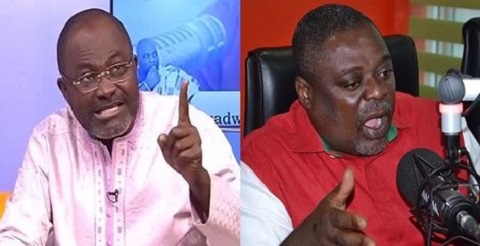 Bring it on, is the message Koku Anyidoho is sending to Kennedy Agyapong in response to his call for a fight.

"I am just waiting for the right moment...I will take good care of him. I dare him to come to the ring for a fight if he claims to be a man. I don't believe in the police who connive with land guards to collect money. I am just keeping quiet because of Nana Akufo Addo. But if he is ready, I will meet him face to face," he said on Oman FM's 'National Agenda' morning show on Wednesday.

The NPP MP claims Mr Anyidoho attempted to coerce a police officer to change the charge sheet of arrested drug baron Asem Darkey aka "Limping man", all in an attempt to implicate him (Ken) in a drug-related scandal a couple of years ago during the tenure of the late President John Evans Atta Mills.

Somewhere in 2012, Koku Anyidoho, then Communications Director at the Presidency, in what can best pass for unguarded enthusiasm, indicated that, “Asem Darkey is singing like a canary…”

He further claimed the “Limping Man” had named some leading opposition figures involved in the cocaine trade and even issued a fiat; that the borders of the country was going to be closed to prevent the named NPP activists from leaving the country under the cloud of darkness.

That and many other allegations by the NDC stalwart, is the basis of Hon Ken Agyapong's ballistic rant, who vowed not to bother reporting it to the police or seek redress from the court.

Asem Darkey was given a 22-year jail term by an Accra Fast Track Court for his role in the disappearance of the 77 parcels of cocaine on board the MV Benjamin vessel years ago.

Responding to the challenge in an interview on Peace FM News @12, Wednesday, Koku Anyidoho said he is ready to fight the Assin Central MP.

“I am not a professional boxer but since he said he will beat me wherever he meets me, I am waiting for him…he should also be prepared,” he replied.

He said Kennedy Agyapong’s comment is an evidence of the “level of lawlessness” in the country.

“…but you see; that is the level of lawlessness we are talking about; that the NPP do whatever they like in this country…he should keep on dreaming. What hasn’t he said in this country….that is him; I am not going to waste my time following any corpse into the grave”.

According to him, ‘unlike him (Ken)’, he has faith in the police and once he (Ken) “issued a public threat, we will see how it goes”.