“I would prove my critics wrong” - Tagoe 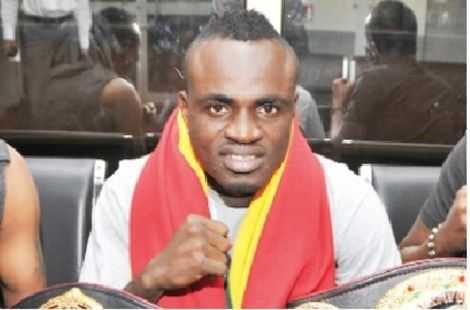 Emmanuel ''GameBoy'' Tagoe, International Boxing Organisation (IBO), Lightweight Champion,has vowed to prove his critics wrong, when he mounts the ring soon, in his quest to become a world champion again.

“Gameboy’’ 28-1,14 Ko’s, was recently stripped off his title by the IBO, after failing to honour his mandatory bout against Fedor Papazov in June.

Despite facing heavy huge critic for his “sluggish” outing against Fernando Saucedo, Tagoe believes he has a lot to offer, after training with renowned Ghanaian trainer, Adama Addy,'' Tagoe revealed to GNA Sports.

“I would prove my critics wrong and very soon my fans would get to know how well I have developed over the past few months, especially with my new trainer, coach Addy who once coached former World Champions,’’ he told GNA Sports.

He further rallied support from fans as he look to annex another world title in the coming months.

“So I entreat fans to come to the Bukom Arena and witness something solid in the coming months, as my management is trying to get the best boxers around the globe for me to fight and I remain hopeful of becoming a world champion once again.’’

Tagoe won the IBO belt in December 2016 after claiming a one-sided unanimous decision win over Mzonke Fana, as he successful stopped Argentina’s, Fernando Saucedo in his first title defence.