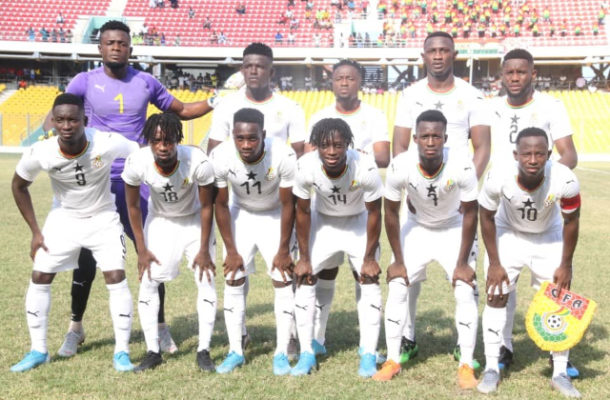 Coach Ibrahim Tanko has silenced his critics as his Black Mateors side outfoxed their Algerian counterpart in their second leg clash with 1-0 to qualify for the u CAF under 23 Nations Cup.

Ghana defied the odds to beat Algeria in the away encounter to grab their first ever CAF U23 Cup of Nations finals.
The result thus gives Tanko a redemption of image as he came under a lot criticism following last Friday's scoreline.

Pundits have doubted Ghana's chances at Setif after that flaundering performance that created mixed feelings ahead of their journey to Algeria.

But the return encounter on Tuesday evening saw the Skipper Yaw Yeboah grabbing the headlines with his goal that sends Ghana to the next step towards Tokyo 2020.
Yeboah, who plays for Celta Vigo, scored the only goal to ensure the Black Meteors secured a 2-1 aggregate win.
Head coach Ibrahim Tanko made three changes to his squad that performed abysmally last Friday at the Accra Sports stadium with Asante Kotoko defender Habib Mohammed, holding midfielder Michel Agbekornu and former Black Stars B captain Isaac Twum all starting.
The changes made by the former Cameroon assistant manager yielded positive dividends as the Meteors showed more intent with captain Yaw Yeboah tormenting the Algerian defenders in the first half.
Les Fennecs elevated their game after recess but struggled to breakthrough with pockets of chances for both sides not taken.
Mercurial captain Yaw Yeboah broke the deadlock in the second half after 69 minutes.
Although, captain Yaw Yeboah scored the crucial goal to send Ghana through it was Asante Kotoko goalkeeper Kwame Baah that kept the Algerians at bay with some stupendous saves to thwart their efforts.
Ghana thus become one of eight countries to seek Tokyo 2020 qualification in the Cup Of Nation tournament to be played in Egypt.

The Black Mateors have failed to qualify for the Olympics since they last participated in  Arthens 2004 and they will have to fight for one the of the three available tickets.