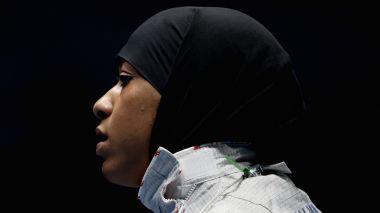 Rio De Janeiro: As Ibtihaj Muhammad walked towards the piste for her opening fencing bout on Monday, a telling message blared across the public address system at Carioca Arena 3.

"We would also like to remind you that the Olympic spirit means to respect diversity," the crowd was told

Those in attendance did more than obey. The uncultivated chants of "USA!, USA!, USA!" could just have easily been heard at the swimming, the basketball or at a Donald Trump rally.

But the commotion at this round of 32 women's sabre duel was significant. The American fans were cheering on Muhammad - a Muslim woman who was making history as the first US Olympic athlete to compete in a Hijab. 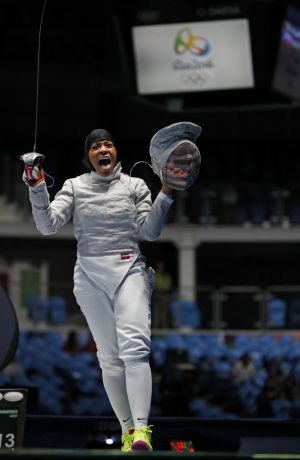 Muhammad, 30, has become a celebrity in recent months, meeting amongst others Michelle and Barack Obama, while Trump's White House charge and divisive views on Islam have only fuelled the interest in the Duke University graduate, who recently told CNN that Trump's views "are very dangerous."

The US is about as familiar with fencing as it is with universal healthcare, but the American media were out in force for Monday's competition.

"At a normal fencing competition we don't have to deal with this many people," Muhammad said after being eliminated from the individual event where she was watched by a large group of family members.

"Or this many press," she added.

"We actually don't have press."

Having beaten Ukrainian Olena Kravatska in her first bout, Muhammad's run ended after she gave up an early lead to Frenchwoman Cécilia Berder in the last 16. Initially overcome with emotion, Muhammad made the media wait more than an hour before talking after the loss. But once she started, the words flowed freely. "I realise that this moment is bigger than me," she said.

"Anyone who has paid attention to the news at all would realise the importance of having a Muslim woman on Team USA. "

She is irked by the way Muslim women are perceived, and was inspired by meeting fellow female Muslim athletes from Kuwait and Saudi Arabia during the opening ceremony, at which she walked out near the front of the US contingent. "That was a beautiful experience - to see other women from around the world, also wearing hijabs."

It was a night she described as "one of the best moments of my life."

Asked what the biggest misconception about her, Muhammad answered: "That someone is forcing me to wear hijab, that I'm oppressed, that I don't have a voice. Anyone who knows me knows me that I'm very vocal, very verbal and very comfortable expressing myself and I've always been like that."

Primarily however, Muhammad remains a sportsperson. She celebrated her early win by raising the sabre in a manner that would make David Warner or Steve Smith proud. She was disappointed to have lost too, and is eager to make amends in the team competition that awaits. "I think the hardest thing about today was trying to remember the game plan in this moment and also execute it," she said.

"[But] I feel proud to represent team USA even in defeat."

Still, her faith is never far away. "I always end every single match with the same sentiment and that's 'I'm faithful to God for the experience."