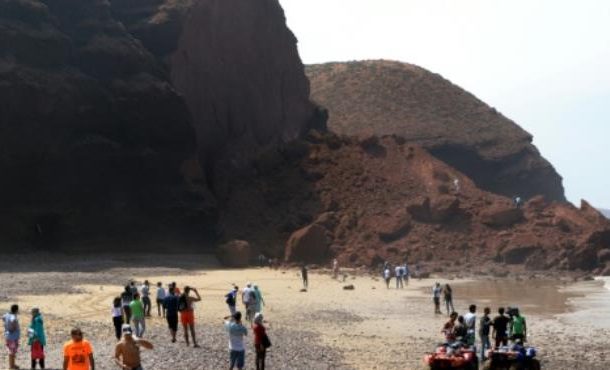 They were among Morocco's best-known natural wonders: two immense rock archways towering over Legzira beach on the Atlantic coast. But on Friday afternoon one of them collapsed.

A massive pile of red rubble now sits where the famous archway used to stand, dominating the popular beach near Sidi Ifni, south of Agadir.

Often cited as one of the world's most beautiful beaches, Legzira is famous for Atlantic sunsets punctuated by the rock structures jutting out from the cliffs.

They were formed over thousands of years through erosion by the sea.

But the action of the waves may also have caused the arch's downfall. A large crack appeared on its southern face in March after a chunk fell off, reported ifnipress.com.

A second, larger arch remains standing further along the beach.

The loss of the archway may be a further blow to Morocco's vital tourism sector, already hit by a drop in foreign tourist arrivals in the first half of 2016.

Marrakesh and Agadir, the country's two main tourist destinations, were particularly affected by the slump, apparently due to holidaymakers being put off by attacks across the region.