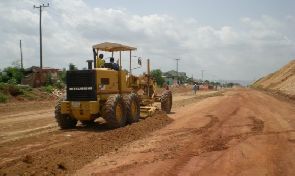 Government has given the contractor working on the Anyinase road in the Nkwanta North Constituency of the Volta Region a two-week ultimatum to complete it or have the contract cancelled.

President John Dramani Mahama, who revealed this while addressing a rally at Kpasa on the second day of his five-day tour, of the region, stressed that government attached importance to the road and, so, any lackadaisical attitude that would stall its completion would not be tolerated.

“We are giving the contractor two weeks. If he does not do his work, we will terminate the contract and award it to another entity because we do not joke with our projects,” Mr Mahama threatened on Tuesday, October 18.

He said the road was the only means by which farmers transported their goods. The delay of the construction, he lamented, was one of the reasons commercial vehicle operators charged exorbitant fares to convey farm produce to the market centres.

“If the road is completed, farmers will not have to spend much on transportation and they will be able to have more money in their pockets,” he added.