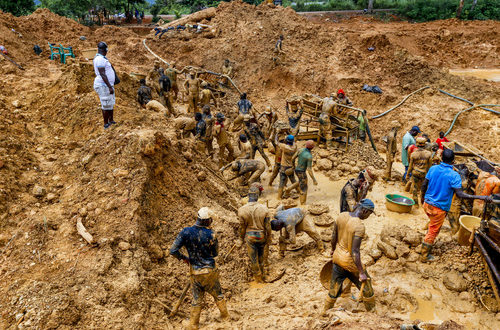 Illegal miners occupying AngloGold Ashanti’s Obuasi concession have up to next week Monday (October 10, 2016), to leave the area or forfeit any benefits from government.

This is the directive from the Minerals Commission.

According to the Commission, a new place has been prepared for the illegal miners as it cannot guarantee their safety at the mine.

“The time has come for the group of informal miners who have occupied the AngloGold Ashanti’s concession to move because we have had enough dialogue and also identified a good place for them to move unto,” CEO of the Minerals’ Commission, Dr. Tony Aubynn, emphasized.

The incursions also led to the death of a senior management staff, John Owusu.

It is understood the movement committee has begun registering the illegal miners and subsequently move them to the new site.

Dr. Tony Aubynn also says the miners have no option than to comply with the directive.

“The Minerals’ Commission cannot guarantee that some other actions whether force or peaceful, will be taken to move them out of the place if they fail to heed this directive,” he said.

Meanwhile Dr. Aubynn has served notice recalcitrant miners will face the wrath of the law if they fail to comply.

“In any case if they don’t move then they miss the chance of getting part of the area that we have identified and are registering for them to relocate to.”

In February this year, hundreds of illegal miners invaded the fenced area of AngloGold Ashanti’s Obuasi mine.

AngloGold Ashanti has also filed a complaint at the International Centre for Settlement of Investment Disputes anticipating that proceedings will expedite the reinstatement of law and order at the mine.

AngloGold Ashanti Ghana had to suspend its underground mining operations at the Obuasi Mine at the end of 2014 after incurring heavy financial losses over several years.

Hundreds of the mining company’s employees were laid off and paid severance packages as mandated by law and in accordance with relevant Collective Agreements and Employment Contracts.