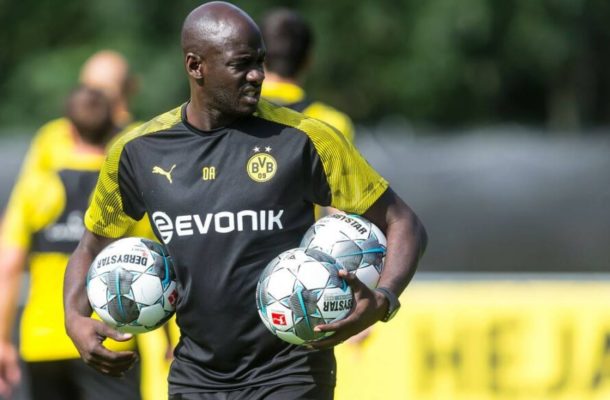 Head coach of the senior national team, the Black Stars, Otto Addo has set the records straight on his role at German Bundelsiga side Borussia Dortmund.

Addo who coaches the Black Stars doubles as an assistant coach of German giants Dortmund but is often mistaken by some as a scout.

The German-born Ghanaian has been at the club the past three years and is highly regarded for the work he does with young players at the club especially.

According to Addo, his role at the club is assistant coach he works as a top talent coach who guide young players in the academy and first team and helps the first team coach during training among others.

He adds that he scouted for Ghana at the 2014 FIFA World Cup because he is domiciled in Germany and has since never worked as a scout.

“First of all, I am not a scout, I am a coach. I did scouting in 2014 for the Ghana National Team. I joined the national team because I live in Germany so I did the scouting in 2014. After that, I never scouted again so I am working as an assistant, more of top talent coach in charge of…especially the young players at Borussia Dortmund," he told Joy Sports.

“I guide them, I coach them on positional training and I assist the coach during the training during the week and I guide the young players when they go down especially (when) they don’t play in the first team.

“They play for the second team. I guide them, I analyze their games and I talk about the games with young players…that’s very important for us, for Borussia Dortmund to develop their players. They get special feedback from me

He accepted the Ghana job as a substantive coach after guiding the country to qualify for the 2022 World Cup and has signed a six month contract.