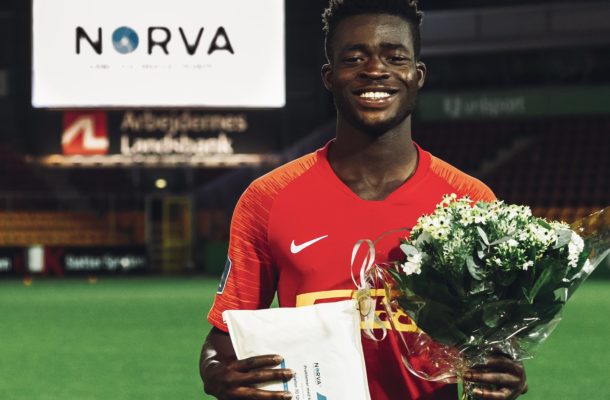 FC Nordsdjaelland and Ghana midfielder, Kamaldeen Sulemana says he is ready to depart the Danish club in the summer if the right offer comes along.

But insists he is happy to stay put at his current club as there is still a lot of things to learn at Farum.

“I feel ready to leave [Nordsjaelland] but if there is no right deal and negotiation don’t go well, I’m still happy to stay here," he said.

“I’ve got a lot to learn and I still believe I can learn a lot here.

“My coach [Flemming Pederson] is helping me a lot and I learn with him every day.

“So I’m happy here, this league I play against some good players and I think it is still a competition.

“I like here and I still think I can improve a lot,” Kamaldeen said.

Ghana's prodigious talent Kamaldeen Sulemana is a man in demand as his list of suitors keeping bulging by the day as English football giants Manchester United have joined the race.

All along it has been Dutch giants Ajax who have been leading the chase for the talented Ghanaian forward with his Danish side FC Nordsjaelland rejecting a 10million pound bid for the 19 year old forward in January.

Ajax's Director of football, Marc Overmars was in Denmark on Monday to watch the youngster as he scored in their 2-2 drawn game against FC Copenhagen his tenth goal of the season.

Kamaldeen Sulemana has been the star man for the Danish side this season in the Danish Superligaen with several foreign clubs taking notice of the player's form.

Bundesliga side Bayer Leverkusen have been mentioned as a suitor for Kamaldeen, and Ajax are firmly in the mix with Manchester United joining the fray.