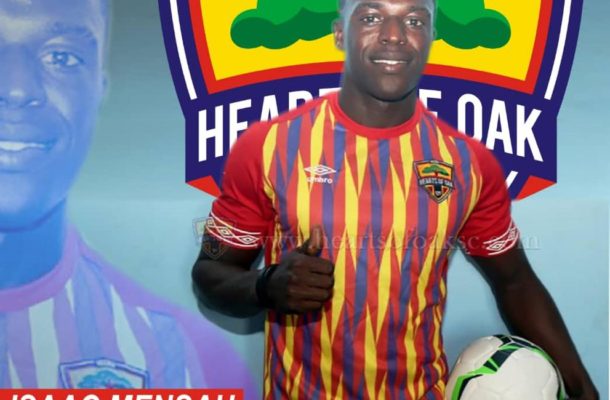 In form Hearts of Oak striker Isaac Mensah says he is ready for the epic clash against fierce rivals Asante Kotoko on Sunday in the Ghana Premier league game.

According to the striker they have had morale boosting wins in the last few weeks with the latest one coming against Liberty Professionals.

Kumasi Asante Kotoko will host Accra Hearts of Oak in their match day 14 outstanding match that will come off at the Accra Sports Stadium.

The striker who had been left in the shadow by former coach Kosta Papic has been given a new lease of life by interim manager Samuel Nii Noi rewarding his gaffer with two goals.

"The Liberty Professionals match wasn't an easy one but thank God we emerged victors," he said as reported by GNA.

"We followed the coach’s instructions and if we should keep on doing this we can come out with positive results in subsequent matches.

"The Kotoko match won't be easy as well but the win against Liberty Professionals was crucial and hopefully, we can secure all three points and I'm very ready for the clash," he said.

Hearts since the chaos amid the departure of Kosta Papic have recorded two wins against Ebusua Dwarfs, Liberty Professionals and will be hoping to add Kotoko to their scalp.