Imam and associate killed in New York City in US 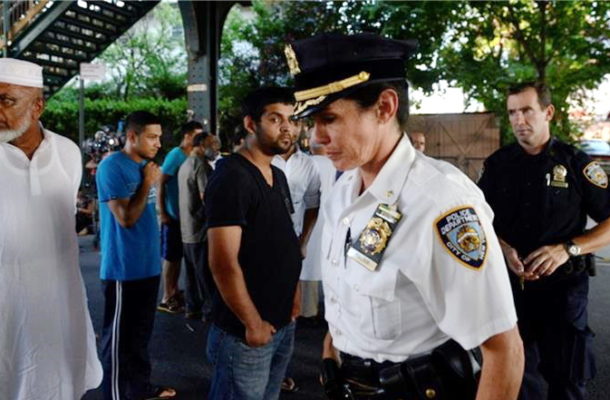 A Muslim imam of a mosque in New York City and his associate have been shot dead while walking along together  following afternoon prayers, authorities say.

The men were approached by a man from behind and shot both in the head on Saturday in the Ozone Park neighbourhood of Queens, a police spokesperson said.

Police said no arrests had been made.

The victims, identified as Imam Maulana Akonjee, 55, and Thara Uddin, 64, were both wearing religious garb at the time of shooting, police said.

The men were transported to Jamaica Hospital Medical Center where they died, the hospital said.

The suspect was seen by witnesses fleeing the scene with a gun in his hand, police said.

"We are currently conducting an extensive canvass of the area for video and additional witnesses," said Deputy Inspector Henry Sautner of the New York Police Department (NYPD).

He said video surveillance showed the victims were approached from behind by a man in a dark polo shirt and shorts who shot them and then fled with the gun still in his hand.

Naima Akonjee, 28, one of the imam's seven children, said she rushed to her parents' home after the shooting.

The New York Times reported that Akonjee was carrying more than $1,000 but the money was not taken.

Members of the Bangladeshi Muslim community served by the mosque said they want the shootings to be treated as a hate crime.

More than 100 people attended a rally on Saturday night and chanted "We want justice!"

Sarah Sayeed, a member of Mayor Bill de Blasio's staff who serves as a liaison to Muslim communities, attended the rally.

"I understand the fear because I feel it myself," she said.

"I understand the anger. But it's very important to mount a thorough investigation."

The motive for the shooting was not immediately known and no evidence has been uncovered that the two men were targeted because of their faith, said Tiffany Phillips, a spokeswoman for the New York City Police Department.

'This is a hate crime'

The Council on American-Islamic Relations (CAIR), a Muslim civil rights and advocacy group, held a news conference on Saturday near the Al-Furqan Jame Masjid, where the two men had prayed.

Kobir Chowdhury, a leader at another local mosque, said: "Read my lips: This is a hate crime" directed at Islam.

Eric Phillips, a press secretary for Blasio, said the mayor was closely monitoring the police investigation into the shootings.

"While it is too early to tell what led to these murders, it is certain that the NYPD will stop at nothing to ensure justice is served," Phillips said in a statement.

In June, CAIR issued a statement calling for Muslim community leaders to consider increasing security after the Orlando massacre and incidents that it said had targeted Muslims and Islamic houses of worship.

A man who called himself an "Islamic soldier" killed 49 people in an Orlando, Florida, nightclub on June 12.

Last year, three American students were shot to death at a residential complex of the University of North Carolina at Chapel Hill over what p olice had said was motivated by a long-running dispute over parking spaces.

However, t he victims' families believe they were targeted because they were Muslims and have pushed for hate-crime charges.

She said her father did not "have any problems with anyone".