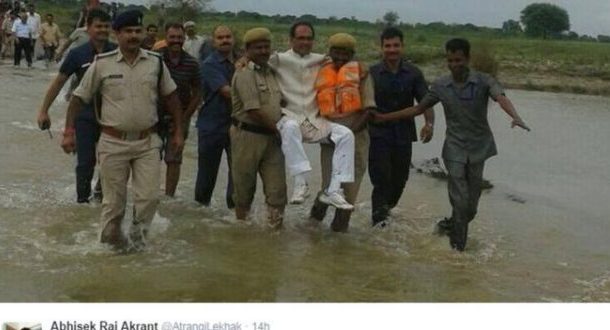 What could possibly go wrong if people take pictures of a chief minister visiting his state’s flood-hit areas?
Plenty it seems, especially if the minister decides that he can’t walk through ankle-deep water.

A picture showing Shivraj Singh Chauhan, the chief minister of the central state of Madhya Pradesh, being carried by police officials through flood waters went viral at the weekend.

The picture has sparked anger, memes and jokes on Twitter.

Large parts of India have been flooded after a number of rivers started flowing above the danger level. At least 17 people have been reportedly killed in flood-related incidents in Madhya Pradesh.

And in the eastern state of Bihar, at least 15,000 people have been evacuated from their homes after a “flood-like situation” in a dozen districts. Floods are common in India during the monsoon season between June and September.

Mr Chauhan, like other chief ministers, visited the flood-affected areas over the weekend to review rescue efforts, but ended up becoming the recipient of bad publicity.

His office told the Hindustan Times that police officials decided to carry him because “he had trouble walking after his foot hit a hard object in the mud”.

But the statement did not stop Twitter users from reacting with amusement. Some Twitter users said the minister’s picture had redefined the meaning of “aerial survey”.