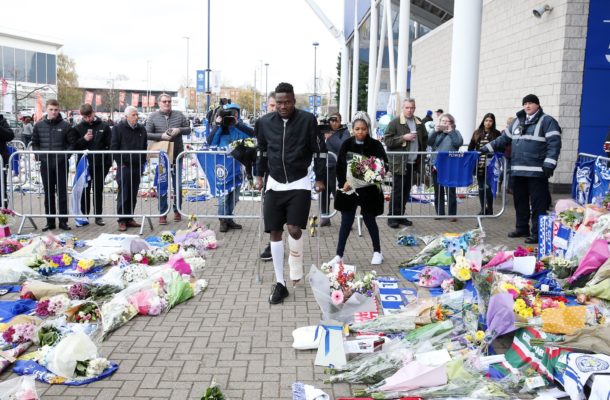 The Ghanaian international who underwent surgery yesterday and is recovering from a serious injury sustained during Saturday’s match, made his first public appearance in crutches to pay tribute.

Following Leicester's 1-1 Premier League home draw with West Ham United, the helicopter collected its passengers from the pitch but then reportedly spiralled out of control and crashed in the car park of the King Power Stadium.

The Thai, two members of his staff, the pilot and a passenger were killed.
Srivaddhanaprabha bought Leicester in 2010 for £39m, cleared their debts and saw the club win promotion to the top flight four years later.

They then beat odds of 5000-1 to claim the Premier League title in 2015-16 in one of the greatest sporting stories of all time.