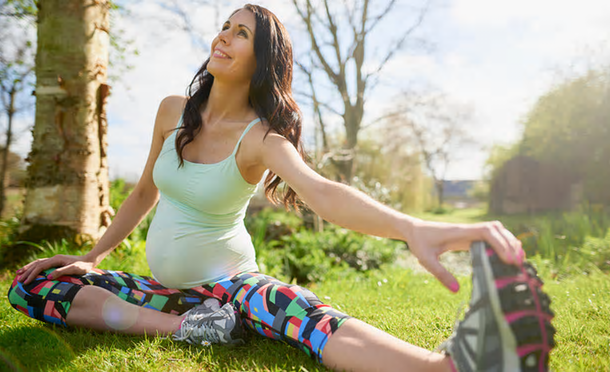 Pregnant women are being bombarded on social media with Photoshopped images and dangerous myths about exercising in pregnancy, leaving many feeling fearful and confused, experts will warn at next weekend’s Baby Show in Olympia, west London.

The exhibition, billed as the biggest pregnancy and parenting event of the year, will feature speakers and gadgets aimed at helping pregnant women to exercise safely and get back into shape after birth.

“In an ideal world, we wouldn’t be surrounded by Photoshopped images of celebrities four weeks after they’ve had a baby, looking like they were never pregnant,” said Philippa Kaye, a GP who will be one of the speakers at the event. “That Instagram-filtered world isn’t reality.”

There is a huge amount of pressure on women to get back into shape quickly after giving birth, and this can lead to injury. “I have seen women take it too far at the gym before and after pregnancy, and it’s caused problems,” she said. “If you never did any exercise before you got pregnant, you don’t want to start with high-impact training or a military boot camp in the park. It’s too much.”

Another speaker, the former Olympian Greg Whyte, has written a book, Bump it Up, on exercising safely in pregnancy. “I’m a father of three and when my wife was pregnant, we looked for reliable, trustworthy information on exercise in pregnancy – and it really doesn’t exist,” he said. Instead, he discovered lots of myths propagated on the internet and social media. “Some of them are actually quite dangerous.”

The most unsafe advice, he said, is often inspired by the blogs and Instagram accounts of women who were extremely active before pregnancy, and who then maintain that level of high-intensity activity through their pregnancy. “For a woman who was inactive pre-pregnancy to take on some of these things ... it can be dangerous.”

He gives the example of Emily Breeze, the fitness trainer who Instagrammed photos and videos of herself lifting a 155lb weight while 34 weeks pregnant. “For her, that was perfectly safe. The problem is other women looking at that [and thinking they can do that too].”

Exercise in pregnancy should be about trying to stabilise your joints and your back to reduce back pain, he said. Kaye recommends mothers of newborn babies focus on strolls with their babies and doing their pelvic floor exercises.

Speakers will also warn women not to be fearful of exercising during pregnancy. “In general, pregnant women don’t exercise enough and that’s bad for their cardiovascular health,” said Kaye. “Pregnancy is a normal natural state, it’s not an illness. ”

It seems, however, that many women would rather not exercise, either because they don’t want to or because they are worried about harm to themselves or their baby. In a survey of 1,300 mothers and pregnant women by the Baby Show, more than a third (39%) revealed they did not exercise at all during pregnancy, while only one in five (21%) said they worked out regularly.

Should I take multivitamins during pregnancy?

Some brands of multivitamins claim to provide mothers-to-be with the maximum nutritional support needed for a baby, but at high prices. However, evidence doesn’t support their claims, or the prices they charge

In his research for his book, he came across pregnant women who fear doing activities and exercises which are not at all harmful. “For example, if you trawl the internet, there’s a myth that if you put your hands above your head, you will wrap the umbilical cord around the baby’s neck.”

Others think they should be eating for two, when in fact only 300 extra calories a day are needed on average throughout a pregnancy. “Controlling body weight during pregnancy is of critical importance, not just for the mother’s health but for the baby as well,” said Whyte. “We know that, with obesity, you increase the risk of a number of complications, for example gestational diabetes. Pregnant women do not need to eat for two.”

Kaye thinks the guilt women feel about not exercising results from the social pressure to look good and fit back into skinny jeans. “In my experience, when women are pregnant they’re very proud of their bodies, but the moment the baby’s born, they’re not,” she said.

“I don’t think it’s important women return to the shape they were before. I think if your body grew a baby, that’s an amazing thing and you should be proud of that. But it’s hard for women to feel that way.”