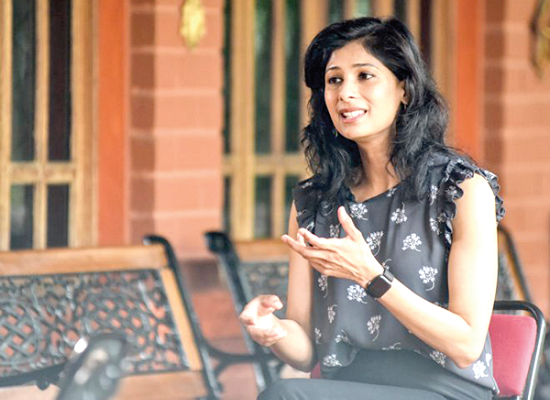 The International Monetary Fund (IMF) has advised Ghana to increase investment in digital economy to maximise its benefits.

It said digital economy had emerged as “one of the winners” of the COVID-19 pandemic and that countries, including Ghana, must be strategic in using the sector to profit more from the pandemic.

In a virtual interaction with economists and students of the University of Ghana, Legon (UG) last Friday, the Chief Economist of the IMF, Dr Gita Gopinath, mentioned improved digital infrastructure and policies as some of the critical building blocks required to bolster the sector’s job creation potential.

“There is a trend shift and we will see much more of digital economy growing post the pandemic.

“What does this mean? It means that countries will have to invest more in digital infrastructure, including broadband network,” she said during a discussion on growth prospects of the economy.

The discussion centred on the fund’s world economic outlook (WEO) as an assessment of the global economy which was released in January 2021.

It was moderated by the Dean of Students of the UG, Professor Godfred Alufar Bokpin, and featured questions from the virtual student audience.

Responding to questions on how Ghana and other low-middle income countries could help address the joblessness caused by COVID-19, Dr Gopinath said the pandemic had boosted the prospects of the digital economy which countries could capitalise on to recover.

The Chief Economist said beyond job creation, a stronger digital economy also made it easier for governments to extend support to the vulnerable through virtual platforms.

Dr Gopinath, who is the first female to occupy the position at the IMF, also called on Ghana and other countries to align academic programmes with skills training required in the economy.

She said that would enable them to acquire competences needed in the job market to make students employable and relevant to the needs of society.

She further called for increased financial access to entrepreneurs to enable them to fund new and existing business ideas.

Dr Gopinath also observed that unlike previous pandemics in which the informal sector of economies were spared, the COVID-19 pandemic had ravaged almost every sector of the global economy, threatening lives and livelihoods in ways never seen before.

She said evidence abounded that informal, hospital and aviation sectors that were worst hit by the pandemic were known to be largely occupied by women and the vulnerable in society.

The chief economist, therefore, called for concerted efforts to help contain the spread of the virus to allow for the reopening of economies for businesses which survived on contact to rebound.

Meanwhile, the fund is predicting that growth in sub-Saharan Africa  would rebound from a 2.6 per cent contraction in 2020 to 3.2 per cent this year.

It reiterated its earlier warning that the pandemic was expected to reverse the progress made in poverty reduction across the past two decades.

“Close to 90 million people are likely to fall below the extreme poverty threshold during 2020 and 2021.

“Across regions, vulnerabilities, economic structure, pre-crisis growth trends, together with severity of the pandemic and the size of policy response to combat the fallout, will shape recovery profiles,” the January edition of the WEO said.