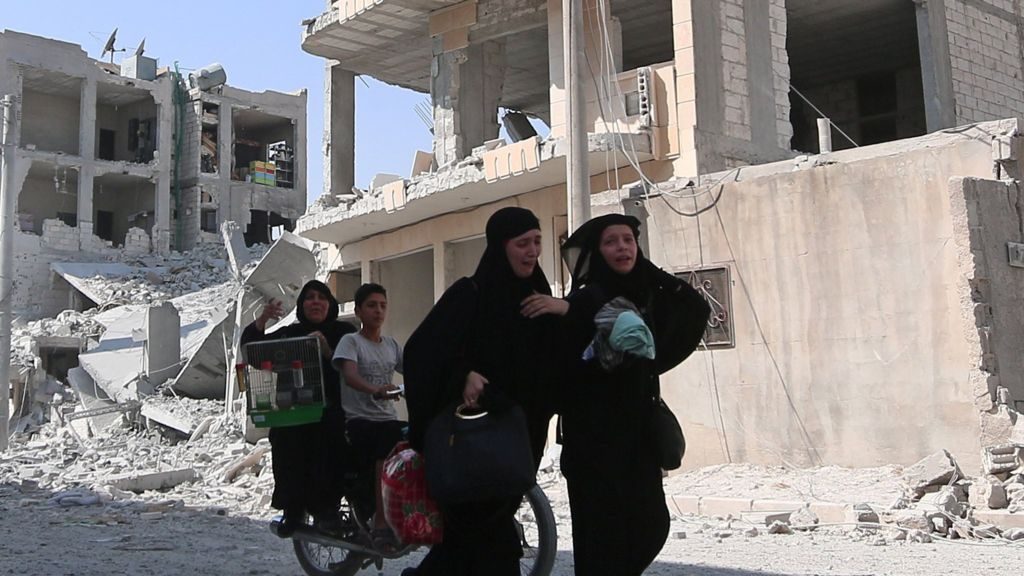 Residents in the northern Syrian city of Manbij have been celebrating new freedoms after being liberated from the rule of so-called Islamic State.
They have poured into the streets enjoying basic rights they had been denied for two years, including shaving off their beards and smoking.

US-backed Kurdish and Arab fighters fought 73 days to drive IS out of Manbij, close to the Turkish border.

About 2,000 civilians being used as human shields were also freed.

Reuters news agency spoke to a resident of Manbij who described a spot where people were beheaded. "For anything or using the excuse that he did not believe [in God], they put him and cut his head off.

"It is all injustice," he said.

Another woman thanked the fighters that had set them free: "You are our children, you are our heroes, you are the blood of our hearts, you are our eyes. Go out, Daesh [Arabic name for IS]!"


Inside 'Islamic State': A Raqqa diary


The Syrian Democratic Forces (SDF) coalition includes the powerful Kurdish YPG militia. They were backed in their campaign against IS by US-led air strikes on IS positions.

The roads through Manbij had become crucial to the group's ability to move fighters, weapons and supplies in and out of Syria.

Routes to Syria's embattled second city, Aleppo, and to the IS capital, Raqqa, pass through the town.

According to the Syrian Observatory for Human Rights, which monitors the conflict from the UK, around 500 cars left Manbij carrying IS members and civilians.

They were heading north-east towards Jarablus, a town under IS control on the Turkish border.

The militias said their victory had cut off the IS militants' route to Europe.

"After the liberation of Manbij, IS members won't be able to freely travel to and from Europe anymore," said Syrian Kurdish leader Salih Muslim.

US officials have said that after Manbij, the coalition's intention is to move on Raqqa.

Raqqa, estimated to have a population of between 250,000 and 500,000, has become the de facto capital of the "caliphate" whose creation was proclaimed by IS two years ago after it took control of large swathes of territory in Syria and Iraq.

In addition to the alliance of Kurdish and Arab fighters supported by the US, IS militants are also under pressure from Russian-backed Syrian government forces. Two days ago, Russian air strikes cut off the city's water supply.