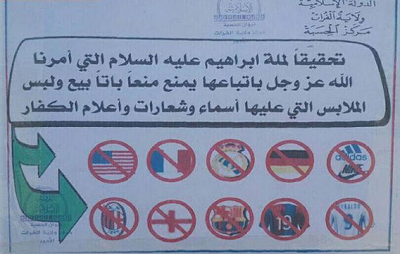 International Islamic terrorist group ISIS has banned Iraqi citizens in Al-Furat province from wearing football jerseys of Barcelona, Man U, Real Madrid , Chelsea and a list of other clubs in Western nations according to a report by Mirror UK.

The decision by ISIS Hisba religious police also extends to sportswear giants Nike and Adidas and defaulters will be given 80 lashes of the cane in public if caught wearing any of the banned sports wear.

Earlier this month, the terror group banned football referees from one of its ISIS strongholds for practicing the laws of FIFA instead of Sharia.