It's an agenda by Ashgold fans to oust me - Thomas Duah 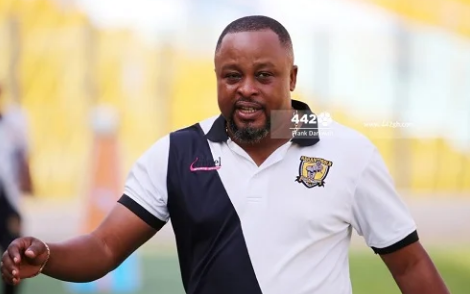 AshGold broke the deadlock of the game through David Abagna Sadan before Abbass Ganui denied the miners deep in injury time to deny the miners all three points.

After the game supporter of the club massed up at the teams dressing room calling for the head of their interim coach Thomas Duah.

According to them, the coach is not good enough and he needs to be replaced as soon as possible to save the team.

One fans said "Thomas Duah is not good enough all he knows how to do is to gossip",

While others blamed him for Ashantigold's poor showing against Techiman Eleven Wonders.

“It is an agenda by these fans to just get me out, there are a few people who started this the moment I got here but I’m blessed and there’s nothing they can do about it,” Duah told Gye Nyame 94.5 FM.

He continued: “If as a supporter you will still complain upon all the chances and the good football we played against Eleven Wonders just because we did not win then I think they best know what they are doing,”

“It is God who blesses and not man so I care less about what they are doing,”

“As I’m speaking I’m still in constant chat with most of the coaches who have left, Roberto Landi chat with me before every single game we play,”

“I have never gossiped about any of them to Dr Kwaku Frimpong,” he insisted.

“I’m a straightforward person and will deal with you personally than go behind you. If anyone wants to know why all these coaches have left, they should go to Champion,”

“I have never sabotaged anyone in my life, it is something I hate and my former teammates and players are testimonies to this,”

“All that they are saying are lies and I leave it all to God,” he ended.