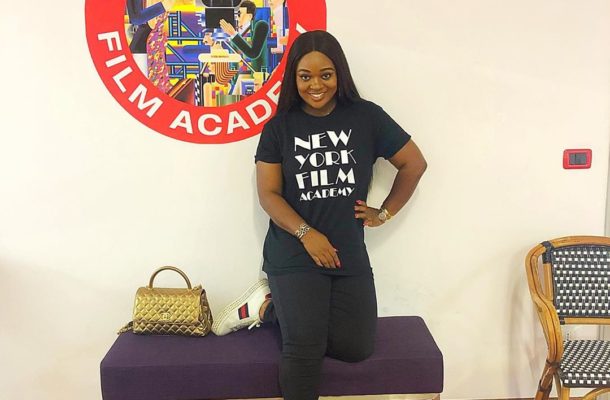 The stunning mother of one has announced that she’s a student at the New York Film Academy, albeit in a subtle way.

She shared a photo of herself at the academy on Instagram, writing: “From having Breakfast in the Pool to the CLASSROOM.”

The 35-year-old Canadian-born Ghanaian actress has graced many billboards and magazines across Africa.

Jackie made her debut in the movie industry in 2005 when she featured in hit Ghanaian series Things We Do For Love. She later took roles in Tentacles, Sun City and many other tv series’.

She made a Nollywood debut and has equally shot countless nollywood movies which has gained worldwide recognition and received various awards.

She is also known to have starred alongside big names in the Nigerian movie industry such as Ramsey Noah, Emeka Ike, Desmond Elliot, Mercy Johnson, Chika Ike, etc.

The beautiful actress is also known for her numerous commercials of which she serves as brand ambassadors for various Ghanaian brands like U.B and IPMC.