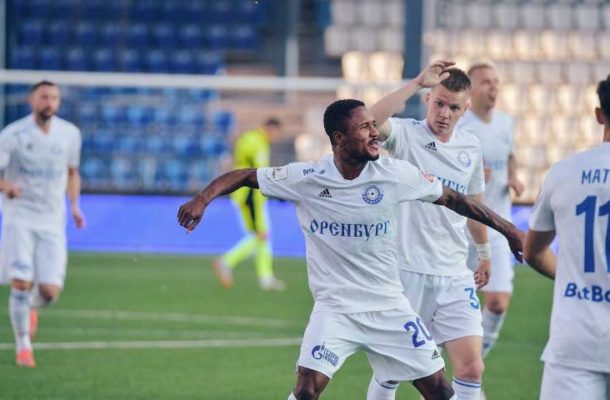 Ghanaian striker Joel Fameye has hit the jackpot with his new club as he will pocket a staggering $24,000 (1.5 million Russian rubles) per month as his salary, Ghanaguardian.com can exclusively reveal.

The striker recently joined relegated Russian side Rubin Kazan from recently promoted Russian League side Orenburg but the player with the move has tripled his salary.

He has signed a three year contract that will keep him at the Kazan based side till  the summer of 2025.

The Ghanaian receives 2-3 times less of the salary he will be receiving at Rubin Kazan at his former club FC Orenburg.

Fameye has been lethal in front of goal since joining FC Orenburg and finished last season with 15 goals in 26 matches.
The former Asokwa Deportivo star played a key role as Orenburg secured promotion through playoffs, but decided to not extend his stay.

His contract with Orenburg ends on June 30. He joined Kazan on a free transfer.

Fameyeh is expected to help Rubin Kazan make a quick return to the topflight following his experience in the second tier.

The Ghanaian striker has been playing for Orenburg since 2019. During this time, he played 84 games, scoring 34 goals.

He has been capped six times by Ghana.