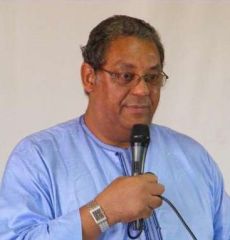 The Deputy Minister-designate for the Local Government Ministry, John Oti Bless has stated that the late Jake Obetsebi Lamptey could have still been alive if not for his greed and quest to steal state properties.

Oti Bless who was recently nominated by the President and vetted by the appointments committee of Parliament last week in an interview on Montie FM stated that God could have prolonged the life of the late Chief of Staff if he had not “illegally” acquired state lands and buildings at the expense of Ghanaians.

"Look at Jake Obestebi Lamptey and how he acquired the state bungalow, if that property was his would he have bought it for that price?...and when this issue was taken to court, judges ruled in his favour.

“…If the late Jake Obetsebi Lamptey had left the bungalow for the state or allowed the state to sell it to construct some low cost building for the poor, maybe God would have saved him and not allow him to die,” the Member of Parliament for Nkwanta North told Mugabe, host of Pampaso last month.

The late National Chairman of the New Patriotic Party died on March 20 in the United Kingdom after an unknown ailment.

When StarrFMonline.com contacted the minister-designate for a response, he angrily said: "What is wrong with one going to the studio to speak your mind. I don't have time for these things".

Meanwhile, three other people who appeared on the show have been jailed by the court for threatening to kill judges of the Supreme Court.