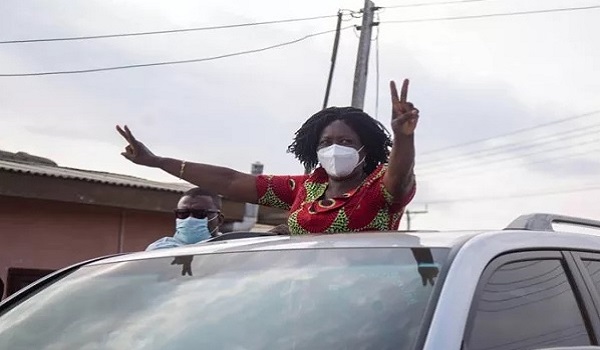 Vice Presidential Candidate of the National Democratic Congress (NDC), Professor Jane Naana Opoku-Agyemang said it is high time the will of the people was brought to mainstream governance, 3news.com has reported.

She further said that is what was at the heart of the NDC’s consultations to form the ‘People’s Manifesto’. She intimated that the times where leaders sit in Accra and draft manifestos for the people are long gone.

“We must make sure the realities of the people are incorporated into policy documents to ensure the people benefit directly.”

She made this known when she took her campaign tour to Kwasiadukrom in the Bodi Constituency of the Western-North Region.

Addressing chiefs and people of the area, Prof Opoku-Agyemang said the NDC’s yet-to-be-launched manifesto is a document that will address specific needs of the people towards national development.

She noted the manifesto is one that touches on every sector of the economy, hence the need for all to support the NDC for its implementation.

She pointed out that ‘The Big Push’ agenda in the manifesto, for instance, when implemented, will see jobs created for the people, youth given hands-on skill training as well as the completion of abandoned infrastructure projects started by the erstwhile NDC government.

She specifically called on women to rally behind the ‘John and Jane’ ticket as they had a deep understanding of community issues.

“This is our time as women and we must take advantage of the opportunity,” she said.