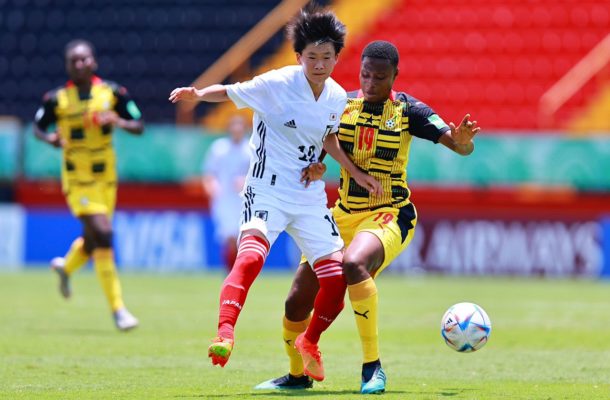 Ghana crashed out of the FIFA U-20 Women’s World Cup after fallen 2:0 to Japan in their second Group D game on Sunday.

The Princesses started on a high by creating some decent chances in search of the opener but their effort fell flat as they failed to take their chances.

Doris Boaduwaa laid a great pass to Suzzy Dede Teye on the right-hand side but her flying shot scaled over the post in the 19th minute.

A great team effort saw Mukarama Abdulai come up with a shot at goal in the 38th minute but she missed the post by inches.

The Japanese also had their share of the possession and created some chances in the last few minutes of the first half but Ghana goalkeeper Cynthia Konlaan was on hand to prevent them from taking the lead as the first half ended goalless.

Ghana conceded a penalty after the break and Hamano Maika made no mistake by converting from the spot to give Japan the lead.

Ghana pushed for the equalizer but conceded another penalty in the 72nd minute as Japan extended their lead through Hamano Maika – her second of the day.

Ophelia Serwaa Amponsah and Rahama Jafaru came on for Mukrama Abdulai and Suzzy Dede Teye respectively but the switches made no meaningful impact as Japan held on to win 2-0 to progress to the quarter-finals.

The Black Princesses have no point after losing two matches and will play the Netherlands in their last Group D game at the Estadio Nacional De Costa Rica on Wednesday, August 17 at 22:00 GMT.