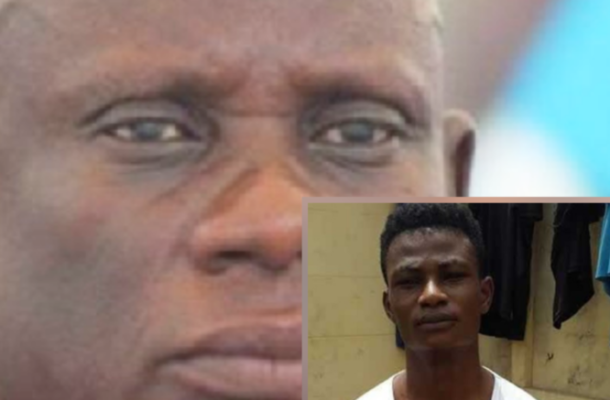 Daniel Asiedu, the self-confessed killer of the late Member of Parliament (MP) for Abuakwa North, J.B Dankwa-Adu has challenged Deputy General Secretary of the governing New Patriotic Party (NPP) Nana Obiri Boahen to come clean over the cold-blooded murder of the former Legislator.

According to the suspect, Nana Obiri Boahen, a legal practitioner who is watching brief for J.B Danquah’s family and the party is well aware of the circumstances leading to the killing of J.B Danquah Adu.

A furious Daniel Asiedu a.k.a Sexy Dondon who was not allowed to speak in court has threatened to take the matter to the International Criminal Court (ICC) for justice.

In court yesterday (Wednesday), the Magistrate, Ms Arit Nsemoh, DSP Goerge Amega, the prosecutor in the case and Nana Obiri Boahen all took turns to bemoan the delay of the matter.

On 20th June Daniel Asiedu told the Court that he was hired by some persons in the New Patriotic Party (NPP) to kill the Legislator.

According to him, those who contracted him rather told him to mention the opposition National Democratic Congress (NDC) as his ‘contractors’ whenever he’s questioned about the crime contracted.

Daniel Asiedu aka Sexy Don don who made the shocking confession in court on Wednesday told the court, presided over by judge Arit Nsemoh, that he was promised to be provided with whatever he asks for after he’s been able to carryout the assignment. He added that he’s still not heard from his “contractors”.

He told the court that only one person from the NPP has visited him since his arrest and is ready to mention the names of the persons who contracted him if he is asked to.

When Her Lordship Justice Arit Nsemoh, asked the suspect if he was making the confession because of the promise or out of a threat, Daniel Asiedu, said he is speaking the truth now because he’s a changed person.

The judge told the accused that he cannot be released for confessing to the crime since he is in a committal stage of trial. She further told him he can only provide evidence on what he is saying at the High Court, where proper trial will take place.

Daniel Asiedu was told to reflect on what he has told the court, and to consider whether to add more or retract them.

The late Joseph Boakye Danqua-Adu died in his East Legon residence in Accra on the dawn of Tuesday February 9, 2016 after he was stabbed by Daniel Asiedu while sleeping.

The police leveled charges against him after he claimed responsibility for the murder.

Bosso who was in the company of Daniel Asiedu is also being held for murder of the Late MP for Abuakwa North.