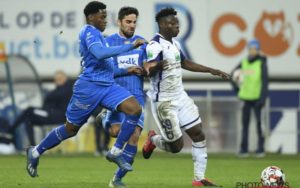 Jeremy Doku has sent a warning to RSC Anderlecht over possibility of  leaving Purple & White.

It comes at a time a time when AC Milan have expressed interested in signing the Belgium born Ghanaian youngster Jeremy Doku in the transfer window.

On Neerpede they are terrified of a departure from Doku, who plays an important role in Anderlecht 's future plans . The Purple & White therefore wants to do everything to keep its youth product on board.

The Rosenerri's are the latest club to show interest in the high flying youngster following his incredible performances this season with Anderlecht.

The 17-year old has made 21 appearances in the Belgium Jupiler Pro League this season, netting three times to prompt interest from top clubs including Premier League leaders Liverpool.

Despite interest from several clubs, Anderlecht are set to hold the player down with an improved offer and a release clause that will fend off teams.

Jeremy Doku is valued from 6 million to 10 million Euros, according to transfer market.