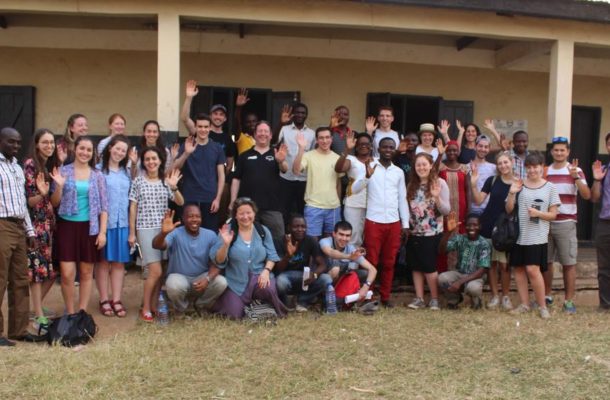 Students from the Ben Azzai group and Rabbi Daniel Epstein at a stop in Tamale, northern Ghana

Last week the Office of the Chief Rabbi sent 16 young people from Jewish community in England to the northern part of Ghana on a mission to understand extreme poverty.

SEEING TRADITIONAL circular mud huts at the roadside in northern Ghana came as something of a shock.

It was no less shocking to see classrooms which would have been out of place in Victorian England, devoid of facilities save for a miserable collection of dilapidated cracked wooden desks, where 120 children are expected to learn at the same time.

Yet as Genna Barnett, country director for Tzedek, Britain’s leading Jewish social action charity, explained, the school in question is the best in northern Ghana.

It was — appropriately during Chanukah, the festival of light and miracles — the setting for an extraordinary project launched by Chief Rabbi Ephraim Mirvis.

The Office of the Chief Rabbi (OCR) first embarked on the Ben Azzai programme, which aims to help make young people more aware of the extent of extreme poverty, because Rabbi Mirvis believes the Jewish community should be reaching out rather than reaching in.

Last year, 16 committed Jewish students went to India. Last week, 16 more of Anglo-Jewry’s brightest and best completed a unique learning opportunity in Ghana, in partnership with Tzedek and supported by the Pears Foundation.

Such social action projects are often taken on by progressive Jews rather than those in the Orthodox community, something that has not escaped the OCR’s attention.

Chief Rabbi Mirvis has wanted to see observant Jews take on a broader brief, bluntly saying: “Being socially responsible is an important part of who we are as engaged, outward-facing Jews, as part of a Judaism that emphasises the principle of ‘achrayut’ — responsibility which broadens beyond our immediate circles of concern and extends to humanity at large.”

Not all of the 16 students on TAMALE ACCRA the Ghana study tour were from an Orthodox background, but they were all high achievers with volunteering experience who the OCR believed could become capable communal leaders in the future.

They were accompanied by Rabbi Daniel Epstein of Cockfosters and North Southgate Synagogue, together with his United Synagogue and Tribe educator wife Ilana, who helped the students link some of what they witnessed — the extreme poverty and deprivation in Ghana — with their Jewish identity and motivation.

The programme began in Ghana’s capital, Accra, giving historical context to the country’s dreadful history as a victim of the slave trade, and introducing the group to the story of Kwame Nkrumah, the charismatic politician who secured Ghana’s independence from Britain in 1957.

But the core of the activities was focused on Tamale, the biggest city in northern Ghana, where Tzedek has been working with local communities for 25 years.

Northern Ghana is primarily Muslim and rural and offers an immediate guide to the country’s two huge problems: how to improve the lot of women and how to tackle illiteracy.

Three women who overcame their difficult starts spoke to the students. George Rosenfeld, one of the youngest participants at 18, said he was inspired