Joel Fameye scores in Russia and takes the knee to celebrate 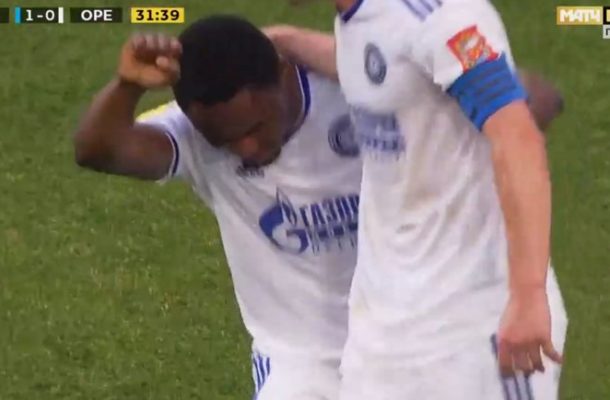 Former Dynamo Brest striker Joel Fameye celebrated a goal against Zenit by kneeling in solidarity with the Black Lives Matter movement that has been preaching against all forms of racism.

The anti racism movement have been very focal since the murder of blackman George Floyd by a white policeman in Minnesota,  Mineapolis in the USA.

Orenburg striker Joel Fameye in a match in the Russian championship  scored a goal against  Zenith St Pettersburg in what appeared to be a consolation goal after a 4 nil lead.

The 23-year-old Ghanaian footballer responded to a throw in the box and  headed into the far corner of the goal.

After scoring, the former striker of the Bobruisk “Belshina” and the Brest “Dynamo” kneeled and raised his fist up, thus supporting the anti-racist movement “Black Lives Matter” .

He recently recovered from Coronovirus started the game for Orenburg FC on Wednesday night .

Joel Fameye has now scored seven goals in 20th appearance for Orenburg in the Russian Premier League this season.