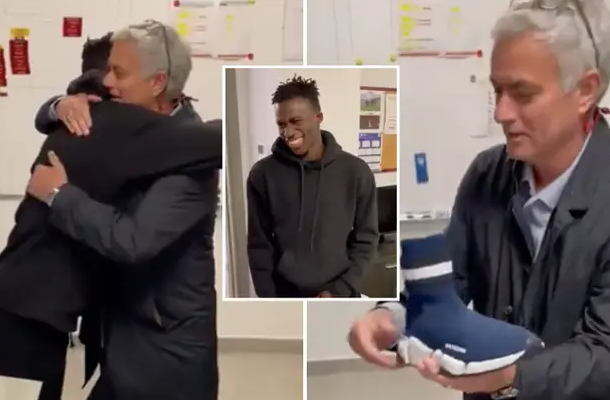 The 18 year old youngster after hitting a brace on Sunday evening ran to his coach to remind him off  the pair of boots promised after scoring the brace.

Felix Afena-Gyan was the hero for AS Roma as he rescued his side from an embarrassing draw against Genoa on Sunday night.

The following moment, a heartwarming video circulated online of Afena-Gyan opening his gift from Mourinho, which set him back around £670 (€800).

The youngster, who seemingly came from nowhere to burst onto the scene, was understandably overjoyed with the gesture.

But in a new interview, Mourinho has revealed that part of the reason he blessed Afena-Gyan with his new sneakers was because he had been made fun of by teammates for wearing fake shoes.

"He was there, he didn't have a contract and he was coming with fake trainers and all the guys there were having fun with him," Mourinho told his former player Joe Cole on BT Sport.

"The moment he scored. I said Felix, it's time for these guys to stop bullying you so let's buy you a proper pair of shoes."

Afena-Gyan has had an incredible meteoric rise of late. He's gone from playing for his high school back in Ghana to the Roma Primavera under Daniele De Rossi, and then playing 22 times for the Giallorossi first-team.

His first-team exploits have seen him pen a sponsorship deal with German sportswear giants Puma.

On his rapid ascension, Mourinho added: "Now he signs a contract, he goes to Ghana national team and he has fun with the other guys because the other guys are not going to the World Cup."

Roma finished sixth in Serie A but won their first silverware in a long while as they won the inaugural Europa Conference League against Feyenoord in Tirana on Wednesday evening.