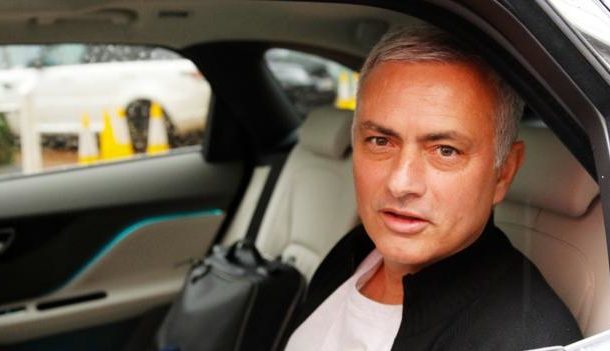 Is the Special One no longer special?
Jose Mourinho was sacked as Manchester United manager on Tuesday after two and a half years in charge.
During his career he has also coached at Benfica, Porto, Chelsea (twice), Inter Milan and Real Madrid but has never been at one club for more than four years at a time. Where will he end up next?

Mourinho's next move
A return to Inter Milan?
Horncastle: "Jose Mourinho is still a very big personality in Italy. At Inter Milan games there is still a banner that says 'Jose Mourinho' and there is a lot of speculation about what might be his next move. Inter always features very highly but this is a very different Inter to the one he left in 2010, a different owner, different president, different chief executive and is it something that is not as clear-cut as many people think.
"He is still popular with the fans but in terms of being a next destination if Luciano Spalletti were to get the sack, but this is someone who got Inter back into the Champions League and recently signed a new contract so I think he will have to look elsewhere before a reunion, a la Chelsea."


Jose Mourinho won the Champions League at Inter Milan in 2010 - his second success after winning it with Porto in 2004How about a new challenge in a new league at Paris St-Germain?
Laurens: "There's no talk of 'could he could come to PSG?'. It could've happened four or five years ago when Laurent Blanc was chosen but he is not the kind of manager they would go for anymore."
Horncastle: "There was a time when PSG would've considered him and he felt it was not the right time for him and that time seems to have changed."
If not France, what about Germany?
Honigstein: "Bayern Munich looked at Jose when he was in between Chelsea and Inter (2007-08) and there were some preliminary discussions. But they have never wanted someone who was too overbearing and wanted someone who could work in the existing structure and they chose Jurgen Klinsmann just ahead of Jurgen Klopp.
"There's no vibe or scenario at the moment (for a move to Germany). Bayern are the one club that could offer enough for him but the sense in Munich is that he does not offer enough for them.
"It is no longer the case where you think of him as a specialist in European football as his record over the past five of six years has been pretty average. It reflects his loss of stature that he is not being mentioned, compared to someone like Zinedine Zidane on the back of winning three European Cups."

Jose Mourinho's managerial record in his past five jobs

What about another spell at Real Madrid?
Horncastle: "Let's watch the Club World Cup. Real Madrid, if they were not to win, imagine the fall-out. Mourinho has a good relationship with [Real president] Florentino Perez and a job has to be done to clear out the old guard and what better person than Jose. That remains a possibility."
Any chance of a wildcard move? To a team in Russia, China or perhaps international football?
Horncastle: "I think he has to be under the spotlight and in the big games so he needs to be in one of the top five leagues."
Laurens: "His own image is far too important to him for him to go to China or Russia. He needs the spotlight and, personally, I think his next move is to be Portugal's next international team manager. Fernando Santos is 64 years old. You have a young generation coming through for Portugal, it would not scare him that challenge.
Portugal boss? So potentially working with Cristiano Ronaldo again?
Honigstein: "I don't think the relationship is so bad between them, as has been reported, but Ronaldo repeatedly went on record and said he did not enjoying playing that way at Real Madrid - he didn't see why they should play without the ball."
Laurens: "I don't think Ronaldo would never play for Jose Mourinho again but it's not a happy reunion of those guys as there's not that positivity between them at all."


Jose Mourinho guided Real Madrid to the La Liga title in 2011-12, but never got past the Champions League semi-finalsJose versus his players
Horncastle: "One of the reasons the decision has been taken by Manchester United is that players were considering their futures.
"Juventus and other clubs around Europe were looking at this situation and the longer it went on the better for them because of the deterioration in relationship between Mourinho and the best players. The headline in La Repubblica the day after the sacking was "Pogba has won". In La Gazzetta dello Sport it was 'Pogba is now laughing'.
Laurens: "It got to the point where very promising players were ruling out Manchester United as they were saying 'I don't want to be the next Anthony Martial or Paul Pogba, being marginalised, not playing, and having my progress impeded.'
"I've talked to a couple of agents with interesting players and the dynamic has now changed. No longer is there that sense of Manchester United being a barren land where you would not dream of sending your best player there."
Is Mourinho worth the risk any more?
Laurens: "If you own or are the chairman of a big European club would you really want Jose Mourinho, knowing that after one or three years that things will get bad, as they always do?
"He will sign something and say he wants to stay 10 years and it never works out. Why would you put that investment in him knowing at some point it will get toxic? I don't know who would take that gamble and hiring Mourinho right now is a gamble.
"You are not sure of trophies and in regards of how much they spend and the damage he has done to that club in two and a half years - it has not been a good return. The style of football, you know will not be good and the relationship with key players will deteriorate so badly that you will have to sack him."
Horncastle: "If you're Real and planning a transition and want to bring in Neymar, are they going to buy into that when they have seen what has happened at United."
Laurens: "If Real Madrid wanted to sign Eden Hazard and Mourinho is the manager I will guarantee that Hazard would not go to Real. The other thing Mourinho has not realised is now clubs have to look at the bottom line - if you are someone that can buy a £5m player and he is suddenly worth £45m six months down the line, that's why Mauricio Pochettino is in demand.
"Mourinho has never been interested in that. He is very harsh and unforgiving and I don't think that's the right model anymore. You cannot afford one of your biggest players to not be playing or developing."

Mourinho's Man Utd ups and downsIs Mourinho tactically behind the times?
Honigstein: "When you go to Real Madrid and Manchester United and try to play underdog football it does not work. It is no longer a strategy to sit deep and hope for teams to be broken down. You can't afford to sit back and wait for things to happen. Even the smaller teams will now have enough quality to beat you."
Horncastle: "When he went to Inter he made a big deal about his 'bible', his methodology where he looked around trends around Europe and adapted his methods but I don't think that has happened for a while. There are other peers like Jurgen Klopp who has a system where you play in a modern style of football."
Laurens: "It was a mess and he tried so many things at United. Against Tottenham in the first half they pressed so high and were unlucky to not be two or three up and it looked like he was ready to change, although they lost the game (3-0 after it was goalless at half-time). Then we have never seen it again. There was something to work on but we never saw it again and we went back to the old rubbish."
Will Man Utd be stronger without Mourinho?
Laurens: "It was on the front page of L'Equipe and it got bigger because of the Champions League draw where Manchester United will face PSG. A lot of people in France were fearing a change of manager because of the positive effect a change of manager could and will have.
"It was a toxic environment and dressing room because of Mourinho. If he was still there, PSG would've fancied their chances greatly, now the atmosphere will get better, key players will play better, everyone will be happy and that's not what PSG wanted.
"Ole Gunnar Solskjaer will turn things around and make this Manchester United squad very competitive again. When the draw was made people in Paris were thinking 'this is a really good draw for us', but now not as much.Source: bbc.com