Journalist 'suspended for her accessories' in China 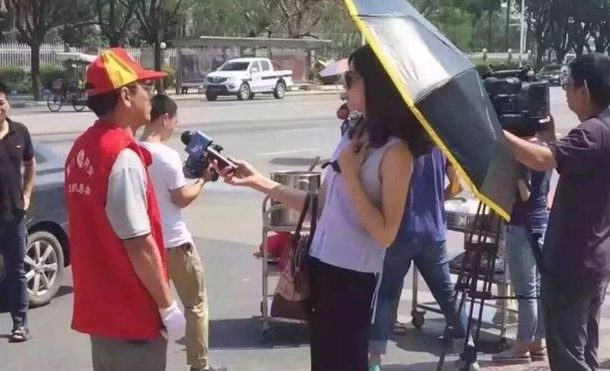 A TV journalist in China who was photographed wearing sunglasses and holding an umbrella to shelter from the sun has been suspended from her job.

The unnamed journalist was photographed while conducting an interview in Xiamen city on efforts to help the city recover from Typhoon Meranti.Her appearance was a stark contrast to the volunteers she was interviewing as they helped clean up after the storm.

The images went viral, with many accusing her of being unprofessional.

Xiamen TV station said in a statement: "One of our journalists didn't obey our rules and failed to conduct an interview properly.

"That damages the image of [the] journalist and had a negative impact on the public."

Weather officials said Typhoon Meranti was the strongest storm of its kind this year. At least one person in China died and another was killed in Taiwan. On mainland China the storm struck southern Fujian province particularly badly.

Online comment, mainly on China's Twitter-like Weibo network, has been divided over the journalist's image and behaviour while reporting on the aftermath of the storm.

Weibo user "Eclairask" asked whether the TV station had been clear that its journalists "cannot have sunglasses on".

"Or is the station forced to suspend the journalist because of public pressure and anger?"

User Pan said: "If you know how difficult and hard it is to be a journalist, you would not focus on her accessories."

But another Weibo user said the problem was that she appeared to lack manners and failed to show respect to the people she was interviewing.

Yanping Zhang, one of the first people to repost the image online, told the BBC the reaction had been far harsher than she was expecting.

Ms Zhang said it was not clear who originally took the picture but that "the punishment is too much".

"I think an internal verbal warning should be fine," she said.

"What I intended to do was show the public that it's disrespectful for a journalist to wear sunglasses and hold an umbrella in an interview."

She was labelled a modern day Red Guard, a reference to the zealous and often ruthless youths who enforced the principles of China's Cultural Revolution, a time which saw many killed and beaten in the name of upholding Maoist ideals.

"I am very innocent. I even don't know the journalist personally," said Ms Zhang.

What should a journalist be in China?

A Shanghai-based female TV journalist Yijing Lin also cast more light on the angry reaction. She told the BBC that it must be understood in the context of the expectations and image the Chinese public has of journalists.

"I wouldn't call it a stereotype, but it does happen," she said.

"I see adventurous people who don't mind getting their feet dirty," an image that many would associate with journalists reporting in the aftermath of bad weather.

Ms Lin argues that the Chinese public wants to see their journalists as smart and intellectually driven.

The perceived focus on appearance does seem to be what has enraged people and, in this instance, it has had serious consequence for the journalist involved.

It is unclear if the suspension will eventually lead to dismissal, but the issue has got China talking about the ethics of journalism as well as the power of online indignation.