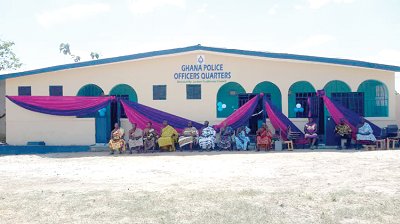 The Juaben Traditional Council has handed over a two two-bedroom building to the Juaben Municipal District Police Command to help ease the accommodation problem facing the personnel.

It cost the traditional council more than GH¢100,000 to put up the facilities.

At the handover ceremony, the Ashanti Regional Police Command also presented a Toyota saloon patrol vehicle to the district police to aid it to combat crime, particularly armed robbery, which was rampant in the area.

At the ceremony, the Omanhene of the Juaben Traditional Area, Nana Otuo Siriboe II, emphasised the need to ensure the well-being of police personnel for them to combat crime efficiently.

He said it was the responsibility of both the State and the citizenry to collaboratively fight crime and ensure a safe and conducive environment for all.

Nana Otuo Siriboe, who is also the Chairman of the Council of State, said the facility was the first phase of accommodation to be provided by the council for the police.


The saloon car presented by the Ashanti Regional Police Command

He said the second phase would be handed over to the service by the end of the year.

He said the traditional council saw the need for it to help provide residential accommodation for the police as most of the personnel were being accommodated by some citizens of the area, while others commuted from Kumasi to Juaben daily, stressing that that was not good enough.

Nana Otuo Siriboe hinted that the council would construct a barracks that would provide accommodation for the police personnel at one point and also ensure the availability of adequate number of personnel in the area to combat crime.

Nana Otuo Siriboe appealed to the personnel who would occupy the flats to practise a good maintenance culture to always keep the building in good condition.

He expressed appreciation to the regional command for providing the district with a vehicle and advised the personnel to also ensure that the vehicle was used strictly for the purpose for which it was provided.

The Ashanti Regional Police Commander, Deputy Commissioner of Police (DCOP) Mr Mensah Duku, commended Nana Otuo Siriboe and the traditional council for their continuous support for the district police command, particularly for providing them with the resources to make their work easier.

Mr Duku promised that the service would adopt a good maintenance regime for the flats and the vehicle.

He encouraged the residents in the communities to volunteer information to the police on the hiding places of criminals to make the municipality safe for productive activities. Source: myjoyonline.com