Justice Crabbe was an institution - Rawlings 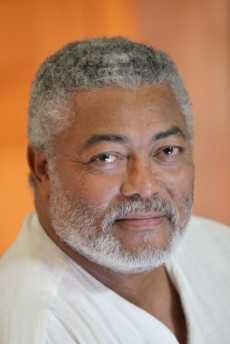 He likened the demise of Justice Crabbe to the falling of a great tree, a statement issued by the Office of the Former President has said. He was 94.

The statement said Mr Rawlings made the remarks during a courtesy call on him by the family of Justice Crabbe, last Tuesday.

The Constitutional expert, who was for many years the Sole Commissioner of Statute Law Review in Ghana, also helped to draft Ghana’s Constitution, and that of the Zambia, Kenya, Uganda and South Africa, among others.

He also founded the Electoral Commission and co-chaired the Coalition of Domestic Election Observers.

“The former President said he had revered the departed constitutional expert for so long and was recently honoured to have sat close to the late jurist when he led a delegation of Ga Dangme chiefs to call on him,” told the delegation.

“I have always respected the man from a distance. I don’t think there’s anybody in this country who does not think highly of Justice Crabbe. He was a quiet, very pensive, and very methodical person. Wisdom sat well with him.”

Justice Crabbe, former President Rawlings stated, had remained prominent for so long and was always alive to issues even as he aged and represented the past all the way to the present.

He said people like Justice Crabbe, Justice Annan and Nathan Quao were a huge source of inspiration to their community and society.

The former President said it was hard to come by personalities of Justice Crabbe’s kind who did not belong to any political, economic or social constituency yet had so much to impart to society.

“Former President Rawlings said when he last met Justice Crabbe, he had a grand plan to exorcise the anger and discontent within the Ga community in a bid to instill a sense of unity within the Ga State,” the statement said.

“I was preparing myself to see how best I could help in my small way, but the problem solver is gone.”

A nephew of Justice Crabbe, Richard Crabbe, who led the family delegation, said the elderly statesman passed away after a short illness, on Friday, September 7, 2018.

He will be buried at a private ceremony after a State Funeral Service on Thursday, October 4.