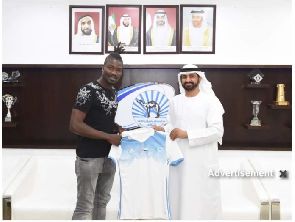 Ghana international, Kadri Mohammed has joined United Arab Emirates side Baniyas SC on loan from Austria Vienna ahead of the upcoming campaign.

The former Ashgold defender joined Austrian top-flight side in the second half of the 2016 season from Ghana Premier League side AshantiGold SC.

The 22-year-old quickly established himself as a key cog in Thorsten Finke's side, making 10 appearances in his debut season.

The towering guardsman's performance attracted attention from a host of clubs but it is Baniyas that showed much interest in his services.

The defender joined the UAE side on a loan deal with the option to purchase him outright, after completing a successful medical on Thursday.

Mohammed made 32 appearances in all competitions for Austria Vienna last term.