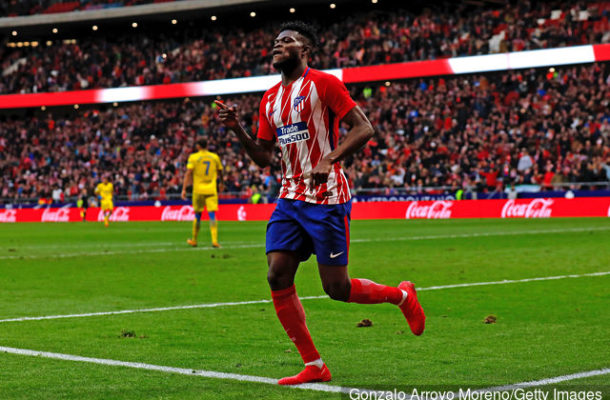 On loan Fortuna Dusseldorf defender Kasim Nuhu has waded into the Thomas Partey to Arsenal speculations that has been raging over the last couple of months.

Kasim Nuhu says the English Premier League is the best in the world as speculation grow over the future of his compatriot.

Atletico Madrid midfielder Partey has been heavily linked with a move to Arsenal for well over a month now, with Gunners head coach Mikel Arteta desperate to bolster his midfield options.

Over the course of the past month or so, many stories and claims have developed about Partey's future, ranging from his father saying Partey was locked in talks with Arsenal to his agent posting cryptic messages on social media.

But the bottom line is, Arsenal want to sign the midfield enforcer by the time the next transfer window comes around, though it remains unclear if that will be possible because of the coronavirus pandemic, which is likely to have a huge impact on clubs' respective transfer budgets ahead of the next window.

Nevertheless, Arsenal remain keen on the idea of signing the 26-year-old, who is understood to have a release clause in his contract of somewhere around £40million.

Now, Ghanaian teammate Nuhu - who plays his club football for German club Fortuna Dusseldorf  has become the latest person to weigh in on the Partey to Arsenal transfer story, claiming that the Premier League is the "best league in the world," suggesting that he may have dropped a subtle hint to his international teammate about sealing a move to the Emirates Stadium.

Nuhu said: "Atletico is a very good club, so he's playing one of the biggest clubs in the world and Arsenal is also one of the biggest, but as we all know the Premier League is the best league in the world, so if he joins Arsenal I will be happy for him." he told TV3's Juliet Barwuah in an interview.

This season, Partey has been a regular fixture in the Atletico Madrid side, racking up 35 appearances in all competitions, chipping in with three goals along the way.