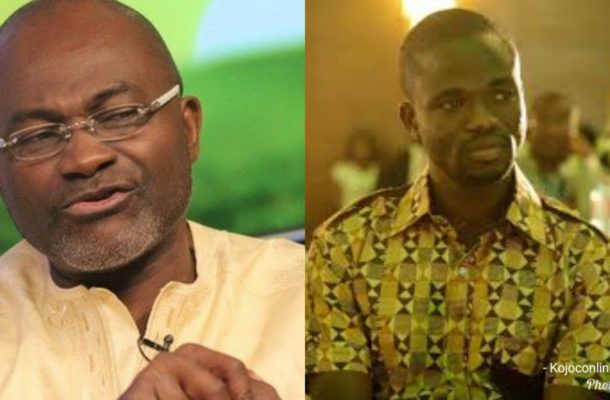 The Assin Central legislator has made a vow to expose the former multimedia journalist for allegedly taking a GHC1,000 bribe in the process of exposing the rot at PPA.

According to Mr Agyapong, he has in his possession a picture evidence that shows Manasseh receiving the said bribe from the embattled Chief Executive Officer (CEO) of PPA, Adjenim Boateng Adjei who is said to be a cousin of Ken Agyapong.

Speaking on his Madina based radio station, Oman FM, the outspoken lawmaker said he will release video footages and pictures of the journalist receiving the said amount in a few days.

He said: “I have a full picture and video of Manasseh taking one thousand cedis bribe from the procurement Authority boss last Saturday. I will show it to Ghanaians this weekend.”

He insisted that Manasseh Azure Awuni had no moral grounds to investigate acts of alleged corruption when he himself has been captured on camera receiving GHC1,000 on Saturday, 17/8/19.

“Manasseh Azure is an extortionist he is a corrupt Journalist and has no credibility, he always goes to Mr. A.B. Adjei for his daily chop money,” he alleged

The documentary dubbed ‘Contracts for Sale’ was published by investigative journalist Manasseh Azure Awuni early this week.The documentary, which made revelations about the conduct of the principal regulator of the public procurement regime in Ghana and the potential extensive abuse of the entire public procurement chain and dissipation of public resources, was released on Wednesday, 21 August.It unearthed that Talent Discovery Limited, a company incorporated in June 2017, has won several government contracts through restrictive tendering.Manasseh has also confirmed that the company was engaged in selling contracts. Undercover encounters with the General Manager of the Company, Thomas Amoah, revealed that the company was selling a GHS22.3 million road contract to K-Drah Enterprise, a fake company Manasseh used for the investigation.This contract was awarded to B-Molie Limited, a company Mr Amoah said was a sister company of TDL.The company also had for sale, a Ministry of Works and Housing contract to construct a concrete drain in Santa Maria in Accra as well as a contract to build a one-story dormitory block in the Asante Akim North District.After demanding and taking a registration fee of GHS5,000 and deposit from Manasseh’s undercover agent, the General Manager of the TDL, who is also the one who signs the contracts on behalf of the company handed over three contracts, when K-Drah Enterprise promised to come on a particular Thursday and pay for one of the projects.The Ministries, Departments and Agencies (MDAs) have confirmed that the contracts being sold by Talent Discovery Limited are authentic contracts that have been awarded to the company.

The company has had contracts with the Ghana Water Company (GWCL), Ghana Cocoa Board (Cocobod), Ghana Ports and Harbours Authority (GHPHA).

Talent Discovery Limited had been shortlisted for restrictive tendering by the Bank of Ghana for the supply and installation of air purifiers.

The company has also been shortlisted by the Roads and Highways Ministry for three road contracts and the evaluation is currently ongoing.The PPA Board has confirmed that TDL was shortlisted by the Ministry of Innercities and Zongo Development for a contract in 2018.

The board also confirmed TDL was brought to the PPA on 14 occasions for restrictive tendering approvals.Such contracts are approved by the PPA, of which Adjenim Boateng Adjei (AB Adjei) is the CEO.