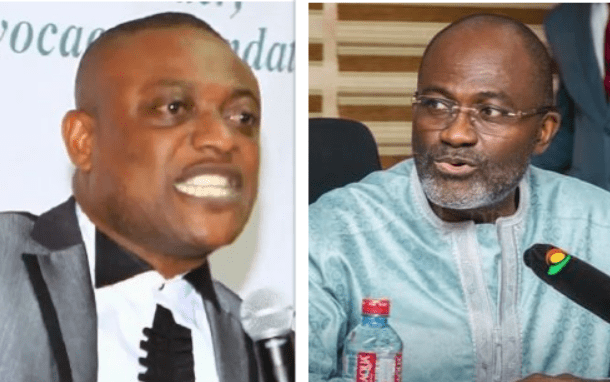 Lawyer Maurice Ampaw has touted what he has identified as the growing political and presidential profile of Assin Central Member of Parliament, Kennedy Agyapong.

Ampaw observed in a commentary session on Wontumi TV on Monday, September 5, that Agyapong had grown more tolerant in recent times especially after announcing his bid for the New Patriotic Party, NPP, flagbearer slot.

“Kennedy Agyapong has improved…he has become more tolerant these days. Kennedy is more mature in his politics, I can say in honesty, he is an honest politician and with that, he has upped his game and some of us are admiring him from afar.

“He is a material that if nurtured and given time, Kennedy has the potential of leading the nation,” he stressed.

He added, however, that the Assin Central MP will have to bide his time and seek to learn the rudiments of becoming president by serving first in a Vice-Presidential capacity.

“Looking at Kennedy Agyapong currently, he needs a little bit of training, just as Bawumia went into the wilderness to serve Nana Addo and now everyone says it is his time, Kennedy Agyapong should also note that if you don’t serve, you will not be served,” Ampaw added.

Agyapong is among over a half-dozen NPP members who have either declared their intent or are rumoured to be interested in becoming flagbearer for the 2024 polls.