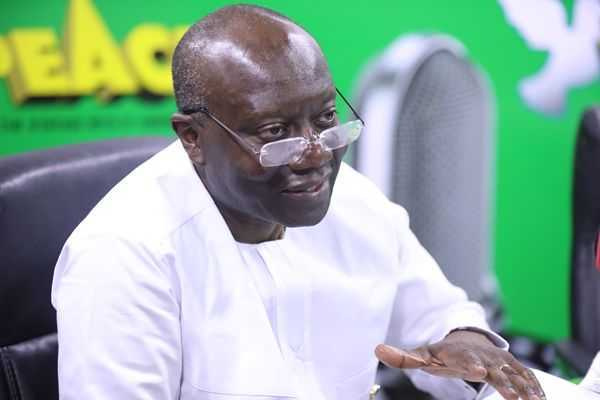 Senior Minister Yaw Osafo-Maafo is in a court battle with the office of the Attorney General over a $1million Kroll contract.

Mr Yaw Osafo-Marfo and four other officials from the Ministry of Finance and Economic Planning, initiated a court action against the Auditor-General, Mr Daniel Yaw Domelevo to clear their names in relation to what the latter found to be breaches of the Public Procurement Act (PPA) that resulted in their payment of US$1 million to an international private audit firm, Kroll and Associates.

This was after the Auditor-General, Daniel Domelovo who is currently on leave, concluded that Kroll was paid for no work done and surcharged the Senior Minister, Mr Osafo-Maafo and the four other officials from the Ministry of Finance.

Speaking on Peace FM's Morning Show, Kokrokoo', the Finance Minister said he "doesn't understand what is going on; I'm even embarrassed".

According to him, "there were a lot of problems at COCOBOD and we went for reputable international investigators to look into it. The Senior Minister was responsible for that . . . " But "I really don't understand why just looking for evidence will end up in court . . ."

He added: "the company (Kroll) was to look at value for money for a number of things that had happened at COCOBOD. What was worrisome was that the AG also surcharged a number of public servants in addition and with that, you create a certain unnecessary fear as to how they do their work, but I'm sure it will be resolved".

The Auditor-General has cited the Senior Minister for causing financial loss to the state, amounting to GHC5.5m

The Auditor-General, during an audit on the accounts and other documents of the Finance Ministry between July 2017 and December 2018 found out that Yaw Osafo-Maafo reportedly entered into an agreement with M/S Kroll and Associates of the United Kingdom on behalf of the ruling government

The company was reportedly paid without approval from parliament and the Public Procurement Authority (PPA).

Kroll and Associates Kroll & Associates was engaged by the NPP government in 2017, to undertake proper forensic investigations of some complex cases of allegations of corruption.

But the Auditor-General says Kroll & Associates has been paid for no work done!

Auditor-General has been asking for documents of their work to be disclosed to him. Kroll is insisting that their work is highly classified during investigations, and qualified to be withheld from public scrutiny for the time being.

However, they are prepared to disclose them in-camera in court (strictly out of open court scrutiny).

The documents requested are of details of the work done and being done by Kroll to justify fees paid to them.

It could be recalled that the Nana Addo Dankwa Akufo-Addo administration, under the expressed supervision of the Senior Minister, contracted reputable auditing firms and other investigation firms to help undertake preliminary but forensic investigations into several of the cases of alleged corruption which emerged when NPP came into office.

Their modus operandi is: once they establish a basis per their forensic work, the file is then handed over to a statutory body, like the CID, and subsequently the Attorney General, to take it up from there. It was for this purpose that Kroll, a global leader in forensic intelligence, corruption, bribery and global asset tracing, was engaged.

Already some of Kroll’s work has formed the basis of a docket, leading to a criminal trial, such as the alleged €100m bad fertilizer purchase case involving former Cocobod CEO.