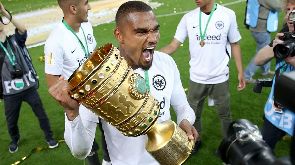 It was second time lucky for the Eagles this time around after finishing as runners-up to Dortmund in the same competition last season.

Ante Rebic found the bottom left corner after receiving a brilliant pass by Boateng in the 11th minute to open the scoring at the Berlin Stadium.

The Bavarians restored parity through Robert Lewandowski at the start of the second half.

Frankfurt were not to be denied however with goals from Rebic and Mijat Gacinovic to clinch their first major trophy in 30 years.