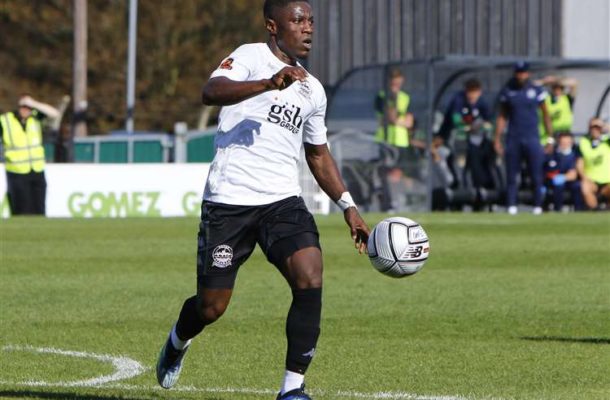 Kumasi-born Kobby Owusu Arthur was in the scoresheet for his English National league side Dover Athletic in their 1-1 draw game against Weyworth.

Andy Hessenthaler's Whites led through Koby Arthur's stunning strike but were pegged back before half-time and are 14 points from safety.

Weymouth should have been reduced to 10 men after 18 minutes but the referee waved play on when Tyler Cordner clearly fouled Ben Williamson in the box - it would have been a red card and penalty had the referee ruled in Dover's favour.

Four minutes later the visitors were ahead when Koby Arthur was given time and space 25 yards from goal and he promptly found the bottom corner with a stunning right-foot strike.

Weymouth got into the game just before half-time and punished Dover for failing to track the run of Josh McQuoid, who finished off a move he started after going into the area unmarked and slotting beyond Parkes.

The hosts started the second half brightly, Henry Woods making a fine save before Brad Ash went close for Weymouth - the same player then denied by Parkes.

Dover looked a threat on the counter with their pace and Weymouth keeper Ross Fitzsimons had to be out smartly to deny Aaron Cosgrave from an acute angle.

Tiensia strode forward from left-back and shot narrowly wide from distance for the visitors with 17 minutes left before Arthur's shot on the turn was straight at Fitzsimons.

He has now scored two goals in six matches for his side this season.